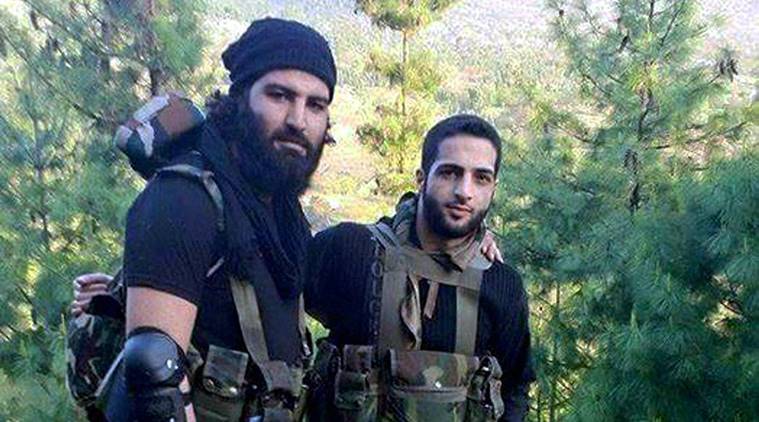 Srinagar: Top Hizb ul Mujahideen commander, Sabzar Ahmad Bhat, has been laid to rest in his home town Tral amid massive pro-freedom sloganeering while Kashmir valley is shut against the killing of two militants on Saturday in Tral.

Sabzar, along with teenage militant, Faizan Muzaffar Bhat, died fighting forces in Saimoo village in Tral in Pulwama district on Saturday morning. Hundreds of people had unsuccessfully tried to help save the militants flee the encounter site. The encounter had started on late Friday night.

Two houses were completely damaged after armed forces used heavy artillery to fight the militants. Locals of Saimoo village claim that two more militants were present in the house which was cordoned off by the forces but they “managed to give a slip to the forces”.

One youth was killed and seven others received bullet injuries in forces action during protests in Tral after death of Sabzar spread across Kashmir.

Sabzar, a trusted aide of slain Hizb commander Burhan Muzaffar Wani, joined the militant outfit in 2015 when latter’s brother – Khalid Muzaffar – was killed by forces in forests of Tral.

Faizan had joined Hizb in March this year when he, along with another youth Umer Ahmad, snatched a rifle from a forces personnel in main town Tral where clashes were going on between the armed forces and civilian protestors.

Kashmir Valley observed a spontaneous shutdown soon after the news came about death of the two militants. The joint resistance leadership while paying tributes to Sabzar and Faizan asked people to observe shutdown on Sunday and Monday and march towards Tral on Tuesday.

The bodies of Sabzar and Faizan were handed over to their families around 6 pm on Saturday at the Police Station Tral. Although Faizan was buried last evening people kept waiting till this morning and Sabzar was laid to rest around 10:15 AM.

“Thousands of people joined the funeral prayers,” a participant said.

At last 60 civilians were injured in South Kashmir protests which turned into clashes “after forces intervention”.

The authorities clamped curfew and imposed restrictions in the Kashmir Valley as resistance leadership called for two day shutdown across Kashmir to mourn militants and civilian killings.

Though the authorities said curfew would be imposed only in seven police station areas of Nowhatta, Rainawari, Khanyar, M R Gunj, Safa Kadal, Kralkhud and Maisuma in Srinagar on Sunday, the city was virtually sealed in the morning to prevent all kinds of vehicular movement.

Heavy deployment of armed forces was made in the old city areas of Srinagar to prevent protests.

Restrictions under Section 144 CrPc have been imposed in Ganderbal, Budgam, Bandipora and Kupwara in north Kashmir while in south Kashmir, the districts of Anantnag, Kulgam, Pulwama and Shopian saw unprecedented security arrangements in place to ensure minimum attendance at Bhat’s funeral prayers.

People in thousands had arrived on Saturday from different places of south Kashmir to attend the burial of Sabzar and Faizan.

Train services between Baramulla and Banihal towns have been suspended.

Civil service (judicial) exam scheduled on Sunday has been cancelled.

All educational institutions have been ordered to remain closed on Monday in the Kashmir Valley.

A J&K police cop told the FreePressKashmir from Pulwama that “situation is under control”.