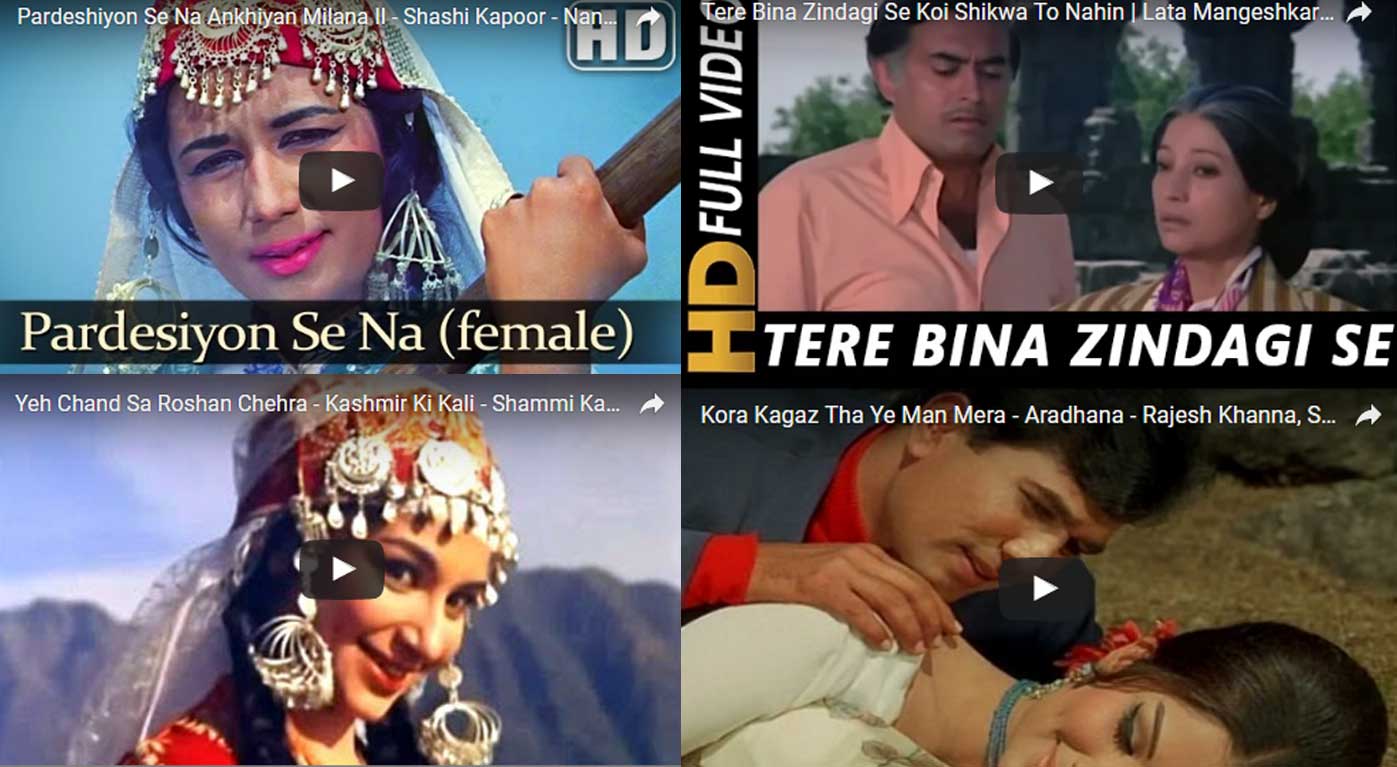 From Sharmila Tagore to Alia Bhatt, Shammi Kapoor to Shah Rukh Khan, we have seen them all romancing in the beautiful backdrop of Kashmir. The people, always shikara walas, or maybe cattle herders, couldn’t be more happier taking care of mem sahib from shehar.

Bollywood directors have had a certain obsession for Kashmir, and its people, as a nice backdrop.

Such is their affection for this ‘paradise on earth’ that even after the devastating floods a couple of months back, shooting at many Kashmir locations has resumed.

If you haven’t been here so far, here are ten bollywood songs that were shot in Kashmir:

Performed against a backdrop of forests and snow-covered peaks of Kashmir in early spring, in Shakti Samant’s Aradhana, teenage girls found a new hotline to heaven i.e Kashmir. Aradhana signalled the rebirth of Kishore Kumar, With a voice that captured youthful effervescence song, ‘kora kagaz tha yeh man mera” composed by SD Burman, the philosophical love song has been shot in kashmir. In the movie the engagement is sealed between Rajesh Khanna & Sharmila Tagore, which is being celebrated with the sun-drenched love song Kora kagaz tha, “My heart was like a blank page.”

If you want to see the vibrant and beautiful Dal lake in late 60’s, this song is a must watch. From Kashmiri dress, jewelry to nature this song has everything.The film’s shooting was stalled for 21 days due to incessant heavy rains in Kashmir. After the weather cleared, it didn’t rain for the next 25 days, and the entire Kashmir schedule was completed. A rich man falls for the charms of a beautiful but poverty-stricken flower girl, but the pair must overcome class boundaries to find true love. Starring Shammi Kapoor (a millionare) & Sharmila Tagore (flower-seller) movie Kashmir Ki Kali song “yeh chand sa roshan chehra” (face as bright as moon) revolves around praising Kashmiri beauty and being located between Dal lake adds to the charm.

Shammi Kapoor, an ace tennis player flips for the poor Sapna (Rajshree) in the picturesque surroundings of Kashmir while participating in a tennis competition. A humorless and pompous businessman goes wild when he falls in love. This can only happen in the beauty of Kashmir. The song shows beautiful streams and red Chinar leaves during pretty autumn in Kashmir. “Tum se acha kaun hai” (There is no one quite like you, my love). Music, though jazzy and fast-paced, is full of love, happiness and fun.

Have you ever seen a frozen Dal Lake? If no, then this song is a must watch for you. The story is of a poor (Shashi Kapoor) innocent and romantic village guy who owns a houseboat in Kashmir and falls in love with a rich tourist (Nanda). The film became a Blockbuster at the box office, was No. 2 in top ten grossing films at the Indian Box Office in 1965. The song Pardesiyon Se Na Ankhiyan Milana has three versions, the female version sung by Lata Mangeshkar, sad & happy male version by Mohammad Rafi. These songs revolve you around lofty mountains, frozen Dal Lake and the crystal clear Nigeen lake.

The Rafi-Lata number “Likhe Jo Khat Tujhe” is beautifully pictured against the backdrop of picturesque mountain valley of Kashmir. Though the times have changed and postal letters has been replaced by electronic mails, but song ‘Likhe Jo Khat Tujhe’ will make you want to write a love letter to your lover. The lyrics of song are inspired by nature love in Kashmir.

The song has golds and reds of the Chinars in autumn to the billowy white of Winter Mountains. This song is shot among the green mountains, lush green forests & the world famous Lidder river. Hasina Maan Jayegi is a 1968 Hindi movie directed by Prakash Mehra. The film stars are Shashi Kapoor, Babita. The film’s music, composed by Kalyanji Anandji, has songs, which are quite memorable, with the melodious Lata-Rafi duet ‘Bekhudi Mein Sanam‘ being the most popular of them all. From the masses of Narcissi and daffodils, and the flowering fruit trees in spring, to the gardens bursting with poppies, roses and pansies in summer.

This song could well be considered one of those ‘what to do and what to see in Srinagar’ travel brochures. The tracks of Gulmarg in snow and happy summer water sport outings of Kashmir make your heart skip a beat.“Nazneen bada rangeen haivaa da tera”, is a happy love song which can make anyone tap feet to dance. This song has beautiful Asha Parekh & Joy Mukherjee.

This was another of those ‘Kashmir in all its glory’ films. Of the outdoor songs, Pukaarta chala hoon main, fabulous music, and Rafi at his best. The girls on their cycles waver around a bit, but the road itself—arrow straight between its rows of Kashmir poplars distinctively slender and tapering is picture perfect. These poplars make the famous green tunnel today.

Aarti (suchtriasen) and JK (sanjeevkumar) meet after 12 years and go to this Martand Sun Temple, which is now in ruins. The Martand Sun Temple is shown as the ruins of the PariMahal that they used to meet at, 12 years ago.The classic “Tere Bina Zindagi Se” was shot at the ruined 7th-8th century Martand Sun Temple. Most of the songs have architectural ruins as a backdrop, depicting brokenness. In Movie Aandhi that time it was alleged that the film was based on the life of the then-Prime Minister Indira Gandhi and her relationship with her estranged husband.