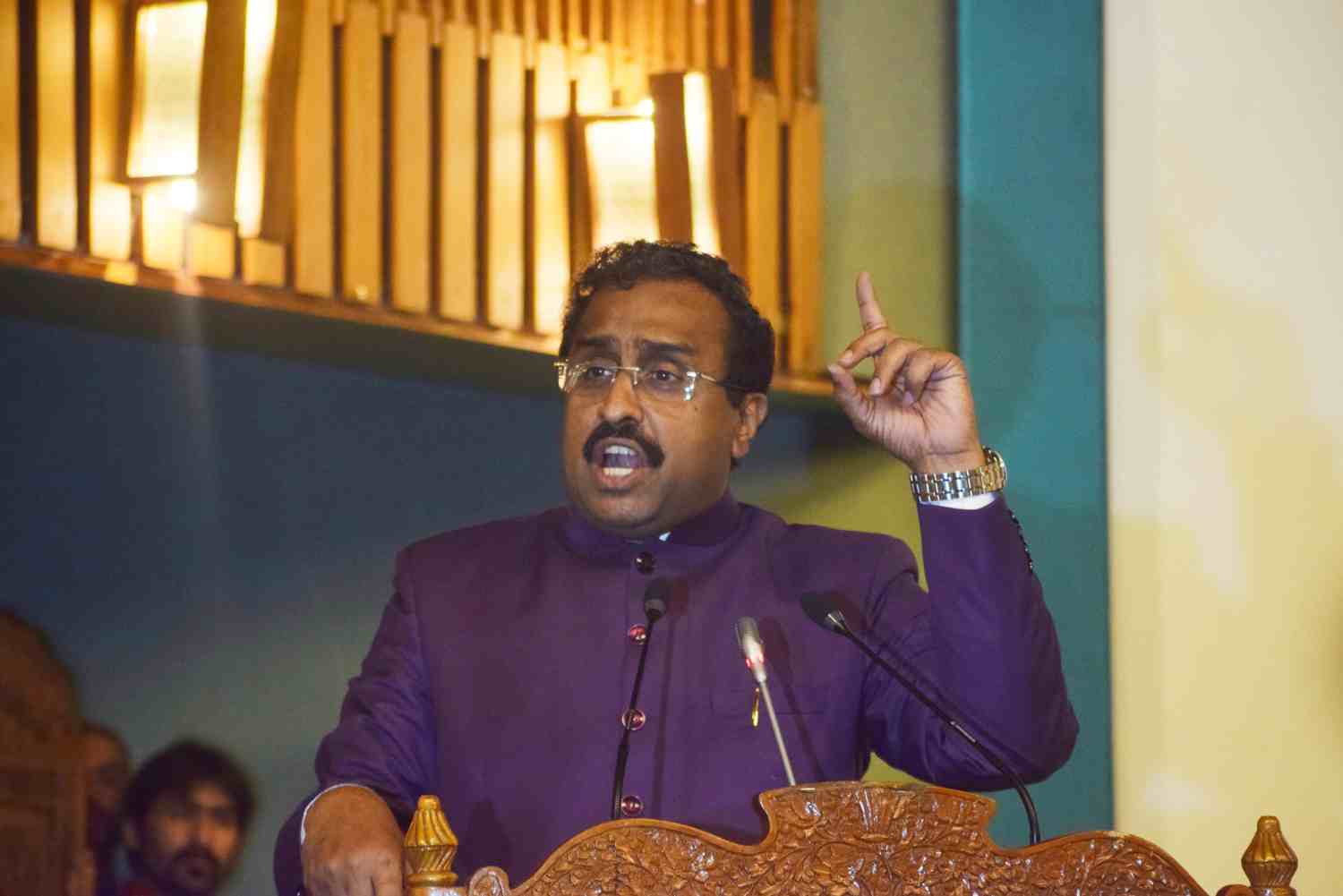 Srinagar: General Secretary Bhartiya Janta Party (BJP) Ram Madhav on Friday said that party’s J&K unit is of the opinion that statehood should be given back to the erstwhile state, when the time is favourable.

“Home Minister Amit Shah himself said while granting UT status that work would be done to get full statehood back very soon. The Assembly is yet to be constituted and delimitation for UT is pending,” Madhav said during an interview with news agency IANS.

On the question of restarting political activity in the valley, he said that most of the detained leaders have been released. Madhav said, “BJP wants all leaders to act as bridges between administration and public by participating in political activities, but all big leaders of PDP, National Conference, Congress are sitting inside their houses.

Congress leaders are not even arrested so they should answer why they are not taking part in political activities. Political activity will start when Assembly elections are held.”

When asked about the recent killing of a Kashmiri pandit in Anantnag, Madhav said that Home Ministry is looking into the entire matter. “Unless we are able to guarantee both security and respect there, it will not be possible for the Kashmiri Pandits to go back to the Valley. Only the formation of colonies cannot lead to the return of the Pandits,” he said.

He said BJP formed government with Peoples Democratic Party because without it the Assembly election would have had to be held again. However, there were some benefits and some disadvantages of forming a government with the PDP. The government fell three years later after the BJP withdrew support.

Madhav said that after the removal of Article 370 from Jammu & Kashmir, there was very little opposition from the public. He said the people have realised that due to Article 370, the personal prosperity of the Kashmiri leaders only increased, but the public did not benefit. Now the public”s attitude is looking positive.

Veteran Hurriyat leader Syed Ali Shah Geelani”s resignation was described by Madhav as the result of Hurriyat”s internal politics.  “Geelani”s resignation will not be able to cover up his political misdeeds of the last 30 years as thousands of youths died in the valley for which he is responsible,” Madhav said.

Madhav also spoke on the issue of China. He said that China has an old habit of land grabbing, but the Modi government has given a befitting reply in the last 5 years. After all, what is the solution to the border dispute with China? On this question, Madhav said that the government is working on two fronts in particular.

Emphasis is being laid on proactive diplomacy and strong ground positioning. While there are talks on the military and diplomatic level, the government is also committed to protect every inch of our land. Every possible step is being taken to ensure that the Galwan Valley incident does not recur again.

Madhav said that since the formation of the Modi government, India has been strict regarding the border policy.

Regarding the 2017 Doklam incident and the recent Galwan Valley incident, he said, “China was also surprised by our strength in Doklam. China was then trying to get closer to the Chicken”s Neck area, but India gave a befitting reply, and the plot was not allowed to succeed. China wanted us to remove our army, but the Modi government had made it clear that the army would not withdraw until China removed the construction near the border.”

He said that this time also when China tried to enter into LAC, they were physically stopped. It also used rods and stones. “Unfortunately, 20 of our soldiers were martyred. But India has sent a message to China that we will not allow China”s move to occupy the border quietly,” he said.

When asked why has the friendly country Nepal stood up against India, Madhav said that even today Nepal may be making some anti-India statements, but this will not affect relations between the two countries.

Although this is not the first time, as such incidents have happened many times since the days of the monarchy in Nepal. He said, “When the king was ruling in Nepal, he used to oppose Nehru.

On the basis of past and present experiences, I can say that much of the reason for Nepal”s opposition to India is internal. When there is an internal problem if it happens, then the government there feels it can target India. ”

However, the BJP general secretary made it clear that relations between India and Nepal will remain as strong as ever.