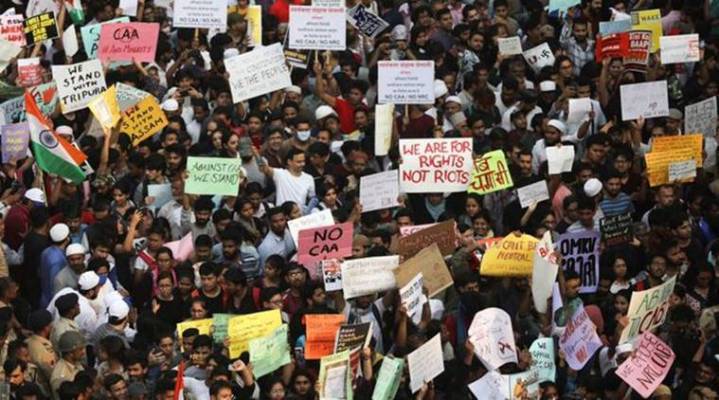 Hyderabad: More than seven months after protests over Citizenship (Amendment) Act, 2019 (CAA) passed by the Parliament of India on December 11, were witnessed in different parts of India, 14 students including one from Kashmir, have been summoned by the Hyderabad police for questioning.

Protests against CAA were witnessed at the Maulana Azad National Urdu University – MANUU campus in February this year.

“It was a season of protests. Everyone was out on the roads. We also protested,” news organisation Clarion India quoted Hadif Nisar, a Kashmiri student studying at Hyderabad University, as having said.

Nisar is one of the 14 students, including two women, from different associations who have been summoned by the police.

Quoting students, the report said that they were surprised to see their name in the summonses at a time when universities and colleges are shut and students are confined to their homes.

They came to know about it when the summonses, dated October 8, arrived at the home of one of the accused, Manikanta, a student who lives in Telangana, on Saturday.

The contents of the FIR said that the accused students gathered “illegally” and conducted a march to the campus showing placards with slogans against the Central government. It says they delivered “provocative” lectures to break the “tranquillity at the university”.

The police say that the students conducted the march without the permission of the police or the university authorities invoking the sections of 143 and 188 of the Indian Penal Code.

However, the accused students refuted these allegations.

Meanwhile, the Jammu and Kashmir Students Association have Condemned FIR against Kashmiri Student Hadif Nisar and 13 others Student of Hyderabad Central University by Telangana Police for anti-CAA protest held in February.

In a statement, spokesperson of association Nasir Khuehami, said that we condemned unnecessary harassment of students and termed the FIR on Students as unfortunate. He said that FIR is a deliberate attempt to involve students in the field which may have adverse results.

The spokesperson said that students, cannot be silenced by these “victimising tactics”.

“Lodging students under fake cases is really alarming. It is an attempt to scare students. The Telangana government is following a Delhi-style witch-hunt against students. He said that Govt is trying to silence the dissenting voices. We don’t understand why Hyderabad Police filed against them for peaceful protest when Telangana Assembly passed a clear resolution against the CAA,” the statement mentioned.

The charges will have serious psychosomatic consequences on the students, hence should be immediately withdrawn, he added.