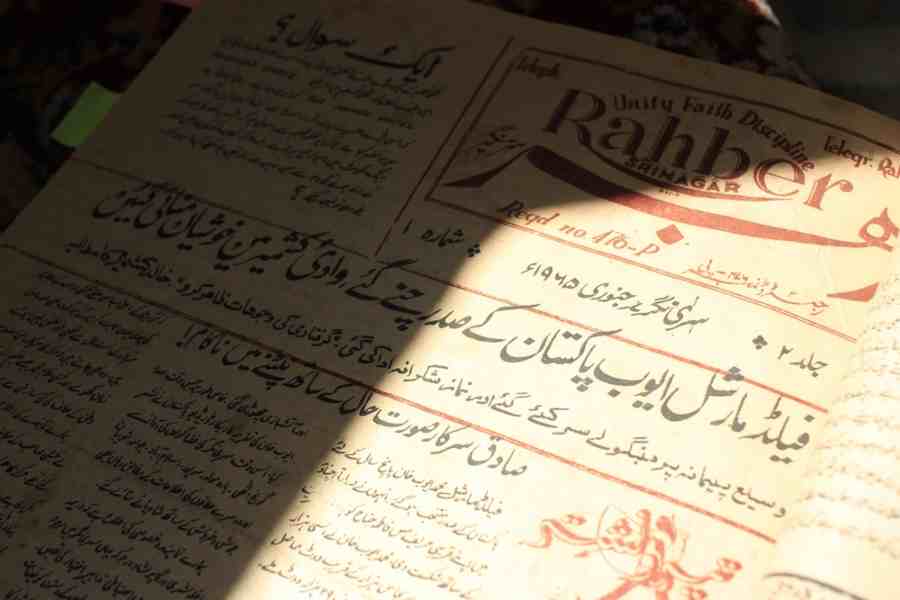 Rahber, an institution in Journalism, a photographer who covered the 1931 massacre, was the founder of an Urdu weekly. A member of Muslim Conference, a social worker and member of Social Reforms Committee, Batmaloo, the first president of now defunct All Kashmir Photographer’s association, and a political activist is one of the many forgotten faces of Kashmir’s politically charged mediascape, not found even in the footnotes of Kashmir’s history.

Sitting on a chair outside Rahber studio, Tariq Iqbal Rahber seems to be engaged in a rather passionate conversation, which I sense to be political in nature, with his salesperson.

I approach to ask him about Rahber newspaper that was started by his father in 1931, and now run by the family.

He guided me to the next lane where his elder brother, Shahid, runs a departmental store. As Tariq puts it, “he is the one who looks after Rahber Weekly now.”

With the New J&K Media Policy which for all intents and purposes has gagged the already heavily-censored media in Kashmir, discussions around the curtailment of freedom of press have been on in the valley and in the international media.

This media policy is the first “legal” document that censors press in Kashmir.

However, attack on press freedom has been an ubiquitous rule for every administration since the regime of the Dogras.

The rule that would imprison journalists and ban newspapers who wouldn’t adhere to the state’s unwritten ‘guidelines’, have been normalized in Kashmir.

One of the many newspapers that was banned multiple times during the Dogra raj is Rahber.

An Urdu weekly, it is still printed and circulated in Kashmir, particularly, Srinagar. The history of the man who started Rahber is rather quite telling of the motivations that drive journalists in Kashmir and the difficulties they tread through to ‘get the truth out’. Shahid Rahber and the medal.

Mohiuddin Manhas, who later was known by the name of the newspaper he started, was also politically active as a member of the Muslim Conference. However, before a political activist, Mohiuddin was a journalist and a photographer.

Born in 1904, a native of Kathua, Mohiuddin’s father had moved to Kashmir during the peak of the treacherous Dogra period. Mohiuddin could not continue his studies post primary-level, becuase for a Muslim under the Dogra rule, it was extremely difficult to attain education.

In his teens, Mohiuddin joined the state band of the Dogra king to earn a living. This band would perform at state ceremonies and functions.

It was during this time, a particular event happened that was to change his life’s path completely.

While still being an employ of the Dogras, Mohiuddin, now Rahber, with another Muslim colleague, Sikander, tried to set up a small masjid in their residency compound. This ostensible exercise of his fundamental right to pray did not go well with the authorities and earned Rahber and his colleague a prison sentence for two years in Jammu central jail.

After his release, Rahber went to Lahore to join the British army.

After completion of his service and with the meagre army pension in hand, he bought a rolleiflex pinhole camera for Rs. 300. In 1927, he returned to Srinagar and in 1929 started working as a drill master in Islamia High School. He would carry his camera to the school every day.

Cameras, a rarity in Kashmir those days fascinated the children in the school. Boys would gather around him to get themselves clicked and take a photo home for Rs.1.

He learned photography and the art of developing photos in a dark room from Gopi Nath Kaul who had a photo studio at Ganpatyar, Habba Kadal.

Later, Rahbar rented a studio for himself at Hari Singh High Street and made photography his profession. On July 13, 1931 when 22 Kashmiris were massacred in central jail Srinagar, Rahber’s friends and neighbours came rushing to him with the macabre news. They wanted him to document what was happening lest the establishment later decides to conveniently forget it and over the course of time, so do the Kashmiri people.

Rahber, by now a battle-hardened survivor in many ways, rushed towards the jail and started clicking photos of the event where the Dogra army mowed down Kashmiris with their guns.

The photos which surface every year on July 13 are probably the product of Rahber’s Rolleiflex.

After this incident, Rahber realised the importance of documenting every single political incident in Kashmir to make sure the present and future generation are aware of the history. His attempt to not let struggles of Kashmiris be forgotten, culminated in him starting an Urdu daily by the name Rahber.

But under the Dogra regime, it was extremely difficult to get a permission from the administration to start a newspaper. As with any authoritarian regime, Dogra administration exercised absolute control over information flow.

For instance, in 1904 the then Dogra king, Pratap Singh drafted rules wherein even asking for permission to start a newspaper was prohibited.

In 1896, Abdul Salam Rafiq launched a monthly called Al-Rafiq which was published from Srinagar. The newspaper highlighted the atrocities of Dogra king on Kashmiris which offended the then ruler Partap Singh leading to the confiscation of the press and forced exile for Rafiq soon after the publication of the second issue of the newspaper.

In 1930s, under Hari Singh, a number of papers began publishing after Prem Nath Bazaz introduced his Vitasta newspaper. One of these was Rahber.

“My father was the first Muslim photographer in the valley,” says Rahber’s youngest son who now handles Rahber studio in Palladium Galli.

“I made sure to continue his legacy, although now the art and science of dark room is no more, but I still keep up with new innovations in the photography.”

After Hari Singh High Street, Rahber opened his photo studio in Lal Chowk and then in Palladium Galli, which stands till date, except the old-wooden architecture has been replaced by modular tiles and walls. Although Rahber somehow managed to start a newspaper of his own, it was not without difficulties.

The newspaper has been banned 6 times since its inception. The first being in 1932, and the last in 1965. Rahber would write fearlessly against erstwhile regimes and would promptly be imprisoned.

He was also imprisoned during the Quit Kashmir movement along with Chowdhary Ghulam Abbas, Allah Rakha Sagar and Munshi Yaqoob Ali, for one and a half years. He continued to be part of Muslim Conference after it separated from Sheikh’s National Conference.

“After the 1975 Sheikh-Indira Accord, my father sort of lost faith in politics and leaders of Kashmir and gave up every activity of his. He resigned from the Muslim Conference and took a break from Rahber newspaper as well. The downfall of Rahber started then and till now we are not able to revive its lost glory,” says Shahid Rahber, the elder son. At the time of his death in January 1986, Rahber’s sons had absolutely no idea of the rich legacy their father had left for them.

“Few days after the funeral, few of his journalist friends including late Nand Lal Watal, late Abdul Rashid Taseer and late Ghulam Mohammad Bhat, took me and my three brothers to a room and explained how our father wished to make Rahber newspaper reach heights and tell the stories that needed to be told,” says Shahid.

Shahid, then 21, soon visited the then Deputy Commissioner, Qazi Mohammad Amin to understand the procedure to revive the newspaper. The DC informed him about the decision of Home Minister of India to impose an indefinite ban on the newspaper because Mohiuddin’s death was extensively commemorated by leaders in Pakistan, a fact that had not gone down well with Indian authorities. By pulling some strings here and there, Rahber’s journalist friends helped his son to arrange the permissions required. A Kendirya Vidyalya educated Shahid did not know the Urdu language at all. From the year 1986 to 1988, he religiously read old copies of Rahber and with help from friends and family, learned Urdu.

“I did all of that because I wanted to revive this newspaper,” says Shahid.

“It was very difficult at first, but I made sure to cover every news update and write editorials. I started with printing special issues on my father to gain back audience who considered him the pinnacle of truth and journalism.”

While Shahid was trying his best to revive the newspaper, Tariq took charge of the Rahber photo studio at Palladium Galli. He inherited his father’s Yashica 635, Click 3rd and Rollieflex cameras. “Later, he had this photo studio only. When I took hold of it, only few families would come to get their photoshoot done. I would click passport size photos and would also cover weddings.”

In the 1990s, when the Indian armed forces would check ID cards, Tariq received a lot of orders to print personal ID cards of people.

“I ventured into that as well,” he continues. “I also introduced first polaroid prints and digital photography in Kashmir. I keep visiting photo fairs in Delhi and Gurgaon to research on the ongoing trends in photography and bring them to Kashmir. I have an emotional attachment to photography because of my father, otherwise, the monetary returns are not much due to prolonged lockdowns and increased accessibility to digital cameras nowadays.” The medal with special issue of Rehbar on Mohiuddun Rehbar as the backdrop.

In 1989, Rahber posthumously received a medal from Pakistan-administered government, along with Prem Nath Bazaz.

“My brother went to Pakistan in 1993 to receive this award but did not agree for an elaborate function to avoid any consequences back in India,” says Shahid.

When I finally asked about old photos of their father and the equipment he used, Tariq said, “We had no idea that someday someone will show up to our studio asking about our father and his history. We never valued his work as much as we should have.”

Nawal is a freelance journalist and a public and media advocacy professional in the social impact sector. She is an independent researcher and photographer based in Kashmir with a focus on critical security studies.