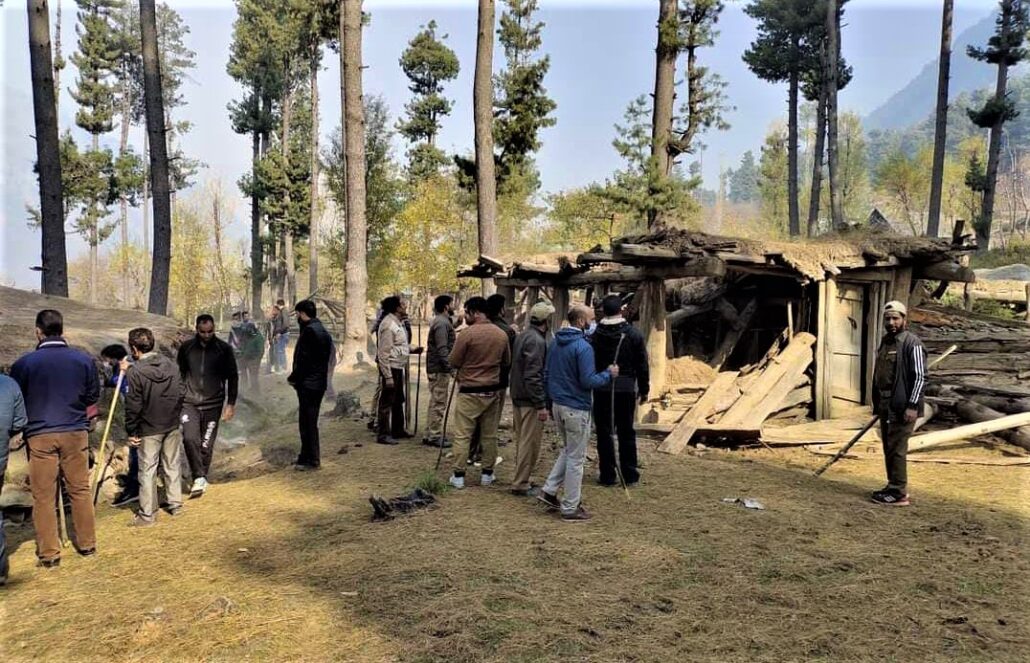 As the administration in Jammu and Kashmir starts its eviction drives to push the Gujjar and Bakwerwals out of their traditional homes, local and international law binds the government against it. But what is the way forward for these communities?

The Forest Rights Act of 2006 recognises the rights of Forest Dwelling Scheduled Tribes (FDST), and Other Traditional Forest Dwellers (OTFD), to forest lands and produce except timber.

The law is informed by the understanding that FDST and OTFD are “integral to the very survival and sustainability of the forest ecosystem” and, therefore, the goal of forest conservation is served by letting them stay on their lands, not by evicting them.

The law enshrines four main rights of the forest dwellers:

Every FDST and OTFD family gets ownership rights to up to 79 kanals, or 4 hectares, of the forest land that they cultivated as on December 13, 2005.

Even if this land that is being cultivated by the forest dwellers is entered as forest land on revenue records, it doesn’t matter. The ownership of 79 kanals of this forest land which is under cultivation of a family will have to be transferred to that family. They can’t be evicted out of that land.

In case they are illegally evicted and their homes and hutments are demolished by government agencies – like in Pahalgam recently as well as in Batote and other places in Jammu – they are entitled to relief and rehabilitation.

The FDST and OTFD population has the “right to protect, regenerate or conserve or manage any community forest resource” traditionally in their use.

The Forest Rights Act covers every Scheduled Tribe person who lives on forest land and whose livelihood is dependent on forests, as the Gujjar and Bakerwal community is.

So the question arises, how can a person or a family claim their rights under the Forest Rights Act.

The law requires the state to set up four committees to verify each claim and award ownership rights. An individual claimant or community has to first approach the village committee, which will vet the claim and make a recommendation to the tehsil or sub-division committee, and then the district committee.

There’s a monitoring committee at the state or union territory level as well. The committees must have members from FDST and OTFD populations as also representatives from the administration.

The decision of the district committee “shall be final and binding”. Any person or family awarded ownership rights to the forest land, however, cannot sell it.

This means that the Forest Rights Act completely shields FDST and OTFD populations from eviction from their forest lands.

What is forest land?

The Supreme Court’s judgment in the Godavarman case of 1997 defines the forest land as encompassing “forest as understood in the dictionary sense, but also any area recorded as forest in the government record irrespective of the ownership”.

In other words, the law doesn’t just protect the settlements of Gujjars and Bakerwals and other forest dwellers inside forests, but even land in towns and cities that’s recorded as forest land and is under their occupation.

On September 6, 2012, the government introduced the Scheduled Tribes and other Traditional Forest Dwellers Recognition of Forest Rights Amendment Rules, which converted all forest villages, unrecorded settlements on forest land and habitations of forest dwellers into revenue villages.

These revenue villages included “the actual land use of the village in its entirety, including lands required for current or future community uses, like, schools, health facilities, public spaces etc”.

The government is also duty bound to provide all the necessary facilities, like roads, lanes, electricity, water, educational institutions and health care facilities etc to these settlements.

The Forest Act makes it clear that it over rules every other law that is operational.

Forest Act is the final word.

This explanation of the law is crucial to understanding why the J&K administration has launched a drive to remove Gujjar and Bakerwal settlements from forest lands.

J&K has not implemented the Forest Rights Act yet, even though it was extended to the territory 15 months ago.

They haven’t formed the four committees to verify claims to forest lands and grant ownership rights. This eviction drive is, thus, a “changing facts on ground” drive.

If the FDST and OTFD community begins to utilise the Forest Rights Act, it will be extremely difficult for the state not only to evict them from their rightful habitations on forest lands but also deny them all necessary facilities to live in those settlements.

The importance of the rights of the tribals and other traditional forest dwellers under the Forest Rights Act can also be understood from the Indian government’s arguments in the Wildlife First vs Ministry of Forest and Environment case.

On February 13, 2019, the Supreme Court ordered the eviction of more than 11.9 lakh tribal and other forest-dwelling families from forest lands across India on the grounds that their claims had been rejected by the committees established under the Forest Rights Act.

This became a political issue, forcing the government to seek a stay on the eviction drive. The stay was duly granted on February 28, 2019.

Arguing for the central government, the solicitor general requested the court that “the eviction of the tribals may be withheld” because their eviction “without such information, would cause serious prejudice to them who have been residing in forests for generations… Many are poor and illiterate”.

He added, “this is a human problem more than a legal problem…forests and tribals are to coexist.”

Separately, the Tribal Affairs ministry filed an application in the court, seeking modification of its February 13 order to halt the eviction drive. One of the main arguments put forth by the ministry was a reference to a host of “international conventions and declarations which are binding on India”.

“The United Nation Universal Declaration on Human Rights, to which India is a signatory, takes into account the fact that recognition of the inherent dignity and of the equal and inalienable rights of all members of the human family is the foundation of freedom, justice and peace in the world,” the ministry noted in its affidavit to the court.

“The UN Convention Concerning Indigenous and Tribal Populations, 1957, which has been ratified by India, relates to protection and integration of indigenous and other tribal and semi-tribal populations in independent countries. Under the said convention, a commitment is made to include protection of customary and traditional rights of such tribal and semi-tribal communities, and the protection of their right to ownership, collective or individual, over the lands which they have traditionally occupied”.

The affidavit also referred to the UN Declaration on the Rights of Indigenous People, to which India is a signatory as well and which “urges the member countries to recognize the rights of indigenous peoples. A key provision of the declaration… enjoins member states to protect the rights to the lands, territories and resources which they have traditionally owned, occupied and used”.

The ministry’s plea also talked about the UN Convention on Biological Diversity, to which India is a party and which “advocates preservation of indigenous knowledge and practices”.

“At the international level, India has actively participated in the formulation of these legal principles and is constitutionally bound to ensure that these are implemented within the country in letter and spirit,” the plea added.

Now think of the Gujjar and Bakerwal community and other traditional forest dwellers of J&K. They are being arbitrarily evicted from the forest lands even before they have a chance to file their claims because the state hasn’t even set up the committees under the Forest Rights Act yet.

The onus lies on the government and not these communities.

The Gujjar and Bakerwal community whose homes and hutments are being demolished have another legal protection: the Scheduled Castes and the Scheduled Tribes Prevention of Atrocities Act of 1989, which does apply in J&K but is not being implemented as yet.

Any atrocity committed against a person or family belonging to a Scheduled Tribe automatically falls under the purview of this law.

In 2018, the parliament passed the Scheduled Castes and Scheduled Tribes Prevention of Atrocities Amendment Bill, 2018 to overturn a Supreme Court order framing procedures for arrests made under this law.

After this amendment, there is no requirement of a preliminary enquiry before an FIR is registered against anybody accused of committing an atrocity against an SC or ST person.

The investigating officer doesn’t require approval for the arrest either and there’s no provision for anticipatory bail. So, if a SC or ST person approaches the police with a complaint under this law, they would have to file an FIR and arrest the accused.

The law is quite stringent, even providing for an official to be punished for “neglect of duty”. There is also a provision for “externment of potential offenders” and “attachment and forfeiture of property”.

The law enjoins the government to set up special courts to hear cases of atrocities against SCs and STs and appoint special public prosecutors for the purpose.

The J&K administration hasn’t done any of this so far.

But as the law is in vogue, members of the Gujjar and Bakerwal community can file cases under it against anybody who threatens them, forces their displacement, or demolishes their homes and hutments.