As the second wave has started settling down, the headman of Athrout lately expressed his gratitude to those who made the community support possible during pandemic. But beyond the humble gesture, there lies a staggering story of the NGO’s rise as the all-weather crisis-manager of Kashmir.

Waiting by the makeshift helpdesk in the Athrout driveway is a young abaya-clad woman. She needs an oximeter to keep her aged father’s oxygen levels in check.

Next in line is a man who needs a PPE suit to attend to the Covid positive members in the family.

As they collect the essentials they need, moments later, a senior citizen shows up at the desk, requesting an oximeter and a demonstration on how to use it.

Surrounded by heritage houses in the old city’s Nawa Kadal area, Athrout’s office has become a go-to place for Kashmiri families that are both financially and emotionally exhausted fighting the pandemic.

Standing by the parked ambulance just a few metres away from the desk, Javed and Nazir, the duo that drives the 24×7 ambulance service for the NGO are on their toes, waiting for their next emergency call.

“We have hardly stepped out of our ambulances this week,” says 45-year-old Nazir.

“The SOS calls keep pouring in day and night,” adds Javed who lately left his ailing mother in hospital to cater to an SOS call for an oximeter.

Javed is 30, and works for a private firm. He has been volunteering with Athrout as an ambulance driver since 2016. 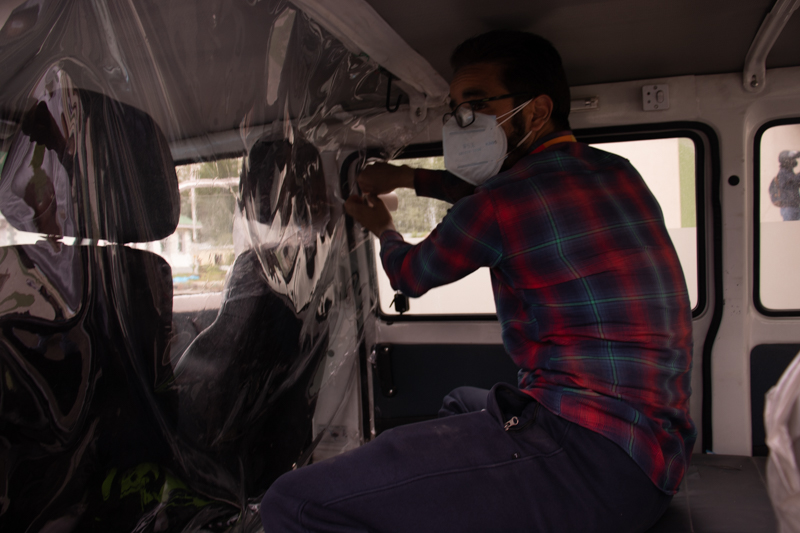 Javed, 30, has been volunteering with Athrout as an ambulance driver since 2016. [FPK Photo/Zainab.]

Time and again, Javed has landed in situations where apart from taking care of his own mother, he had to take care of complete strangers.

While performing his COVID duties during the first wave of the pandemic in Kashmir, Javed found himself in a stranger’s house, serving food to an octogenarian Covid positive woman whose two sons had refused to attend to her. Fearing they might contract the virus from their aged-ailing mother, they locked her up in a separate room and did not even provide her food.

“This pandemic has been so hard. I just can’t explain it in words,” Javed says.

His daughter, Mariam, was an infant in June last year when the pandemic started in Kashmir.

“I would take all the precautions yet I was so scared to embrace her,” he says with moist eyes.

Athrout which is a Kashmiri word, and roughly translates to helping hand in English has now become a household name in Kashmir. The non-government organisation was founded by Bashir Nadvi, 15 years ago, when he was 29.

“We started in 2005, and ever since, there has been no looking back,” Nadvi says, pausing to take a phone call.

The phones in Athrout never stop ringing. You can always hear a landline alarming. Cell phones of volunteers, managers, and ambulance drivers are vibrating and buzzing all the time.

“And all calls are important. All of them are genuine,” says Nadvi.

“Last year during peak Covid, we used to get 10 calls every 10 minutes. Four of these calls were for oxygen concentrators while the remaining six were for food kits, medicines, baby food et cetera. Today we get 10 calls in one minute, and all 10 calls are for an oxygen concentrator,” Nadvi remarks, saying that this sequence makes it quite easy for us to understand the gravity of the situation that has engulfed the valley.

In the last one decade, Athrout has overcome many challenges. During the 2016 uprising that followed after the killing of a popular insurgent commander Burhan Wani, their ambulances ferried injured protestors to hospitals.

“It was the time when I picked dead bodies in my arms,” says Javed.

“Then came the highway blockade in 2018, followed by the post-abrogation siege,” says Nadvi recalling the challenging times for his organisation.

“But Covid has been the most challenging of all the other situations. It is like an enemy you cannot see, yet there is no denying that it is there.” Volunteers and paramedics taking a break outside the Athrout Covid facility. [FPK Photo/Zainab.]

In the second storey of Athrout’s building, Wasim Rashid, who joined the NGO just six months back as an admin officer is busy cutting out a xerox of an identity proof from a sheet of paper as he cradles a telephone receiver between his neck and shoulders.

It was an SOS call for help on this receiver that motivated Wasim to permanently join the NGO.

Three months back, he received a call from a CKD (Chronic Kidney Disease) patient who lived with his wife. Disowned by their family, the couple lived in one small room. The husband was dying and needed to be hospitalised immediately but nobody from his family or extended family was ready to be an attendant in the hospital. Then his nephew agreed, asking the NGO to pay him first and cover all medical expenses.

“It has been emotionally overwhelming to see how people neglect their own family members in these trying times, and this became a reason that I continued working with Athrout,” Wasim says.

But as the oxygen demand surged during the second viral wave in the valley, the welfare body put all their 350 oxygen concentrators in use. “The frequency of the calls for oxygen support made us realise that the situation was much worse than what one liked to believe.”

To prevent the deaths due to the shortage of oxygen availability, Athrout collaborated with the District Disaster Management Authority of Srinagar and converted Kashmir’s Haj House to a 100 bedded oxygen facility in three days. A patient is being treated at Athrout’s makeshift Covid centre. [FPK Photo/Zainab.]

“In just the first three days,” a senior officer said, “we recorded dozens of admissions.”

Posted in the Haj House oxygen facility, a doctor—fighting the pandemic as a frontline warrior since last one year—shared his personal experience with a tinge of sadness.

“To prevent my parents from being vulnerable, I moved to a new house just adjacent to my parent’s house,” he says. “I live there alone now. I am on duty in highly infected zones, and I can’t risk the life of my parents by going near them.”

For a year now, while greeting his parents from a distance, the medico has never failed or faltered in his line of duty. Qayoom, a multipurpose health worker has been on the frontline treating COVID patients. [FPK Photo/Zainab.]

As the day comes to an end, the patients from the makeshift Covid facility get discharged, and a few critical cases get referred to the Government hospitals.

The health workers, doctors and the volunteers now have a few minutes to themselves. They sit together in the facility lawn, for some refreshment.

As the sky gets darker, and anxieties sear, Qayoom prepares for the long night ahead.

“We don’t know what is going to be the end of this,” says Nadvi, pleased how the makeshift Covid facility is tackling the critical situation. Doctors offer prayers in the lawns of the makeshift Covid facility. [FPK Photo/Zainab.]

However, working in conflict-torn Kashmir hasn’t always been easy for them. Seven months back, Athrout’s office was raided by National Investigative Agency (NIA).

“Certain NGOs and Trusts are collecting funds domestically and abroad through so-called donations and business contributions etc. and are then utilizing these funds for secessionist and terrorist activities in J&K,” NIA had said in a statement.

Recalling the day of the raid, Nadvi says, “After going through our records for hours together, the officers wanted to hug us and insisted that we continue doing the kind of work we do.”

“They realised that we have adopted 2000 families, and we provide food and medication to them. If our work is hindered, it would not only affect us, but also all of those people who need us,” says Nadvi.