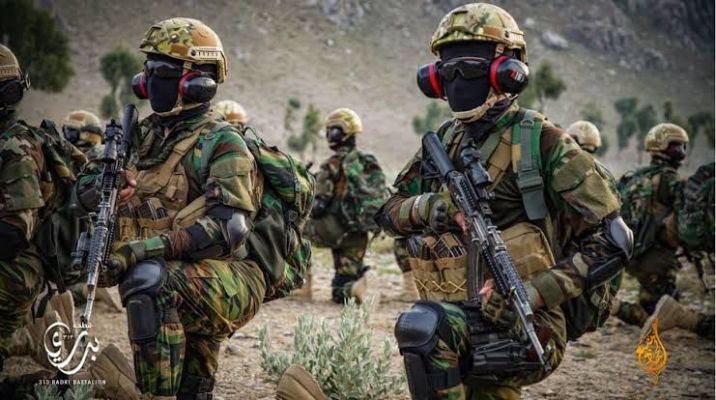 In a series of photographs posted on social media last month, the 313 Badri Battalion – a militant group with members including the Taliban, show the honouring of new recruits calling them “newly graduated units”. In photos, they also pose on their knees while brandishing their guns as they wave the Taliban flag.

Zaid Hamid, a Soviet-Afghan war veteran, who was quoted in a report by UK-based news website The Sun, said the Taliban photos, released on July 28, showed they had “gone one step further” than stealing from Soviet forces between 1979 and 1989.

He said: “When I was part of Afghan Mujahideen, we defeated the Soviet Union using the Soviet weapons, either snatched from the Soviet army or given to us by our allies.”

“But Afghan Taliban have gone a step further. They only snatched from the Americans and the Afghan army.”

He added: “From a rag tag militia of shepherds, farmers and shopkeepers, Afghan Taliban have really come of age.”

“Indians fear that very soon they will find them in Jammu and Kashmir too,” The Sun quoted Hamid further saying.

A member on the Pakistan Defence website commented: “No longer a bunch of farmers in sandals. “They have become an actual professional paramilitary force.”

The report, quoting another member of the Pakistan Defence member, said the Taliban looked “better equipped” than the Pakistan Army Special Service Group.

The photos were made public as conflict in Afghanistan continues, and the Taliban claiming control of an estimated 85 per cent of the country.

They have surged in recent weeks, capturing dozens of districts and key border regions from the Afghan government forces and military.

According to reports, refugees have been fleeing to borders to escape as the militant group sweeps across the country.

Meanwhile, Taliban have warned India against playing a military role in the country.

“What do you mean by military role? If they come to Afghanistan militarily and have their presence. I think that will not be good for them, they have seen the fate of military presence in Afghanistan of other countries,” news agency ANI quoted Qatar-based spokesperson of Taliban Suhail Shaheen as saying.

He added: “So it is an open book for them. And about their help to the Afghan people or national projects, I think that is something which is appreciated”.

The dam had been inaugurated by President Ashraf Ghani and Prime Minister of India Narendra Modi in 2016. The province capital and Afghanistan’s third-largest city, Herat city, has already fallen to the Taliban.