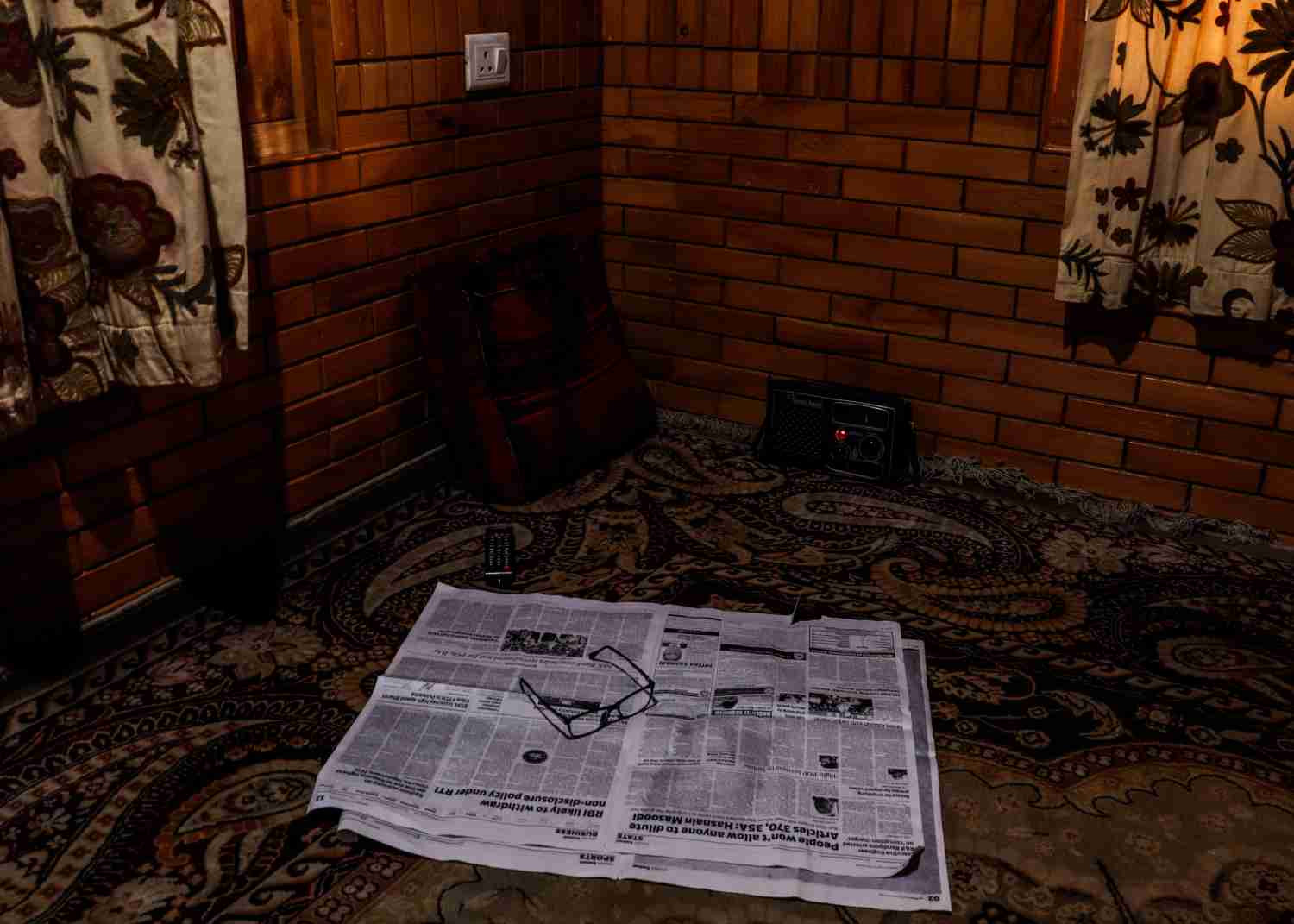 Swerved by strife into a Theatre of Absurd, Kashmir is grappling with the senselessness of the words prevailing for decades and lingering on till date.

Defined as being against reason or common sense, false or foolish, when placed in literary field, Absurdism is a belief that life is meaningless and all endeavors to understand the universe are doomed to languish.

One can also understand it as a perspective that stands for the idea of humanity trying to find essence, meaning or rational explanation in the universe will eventually fail because life and this world have no substantial meaning.

The idea of Absurdsim was first used by Albert Camus in a well-defined manner in The Myth of Sisyphus in 1942, which reflected upon the meaninglessness of human life and its futile and ineffective actions.

This notion attained propulsion chiefly after World War-II as the people were estranged and alienated from the environment adieu to the catastrophic changes taking place all over.

Nations and cities were getting destroyed, everything turned upside down, and all things known to humans were swerved topsy-turvy. Human existence came under a momentous skepticism. Hence all these ideas were concerted by Camus in the form of a philosophy. This idea was eventually used by numerous playwrights in European and American drama (Kroger, 12).

In 1962, Martin Esslin, a British playwright and critic termed this idea as Theatre of Absurd.

Esslin in his book with the same titles formulates this idea as something devoid of any purpose, lost, senseless, useless, cut off from transcendental, metaphysical and religious roots. It elaborates man has lost all his roots and has come to a belief that all his crusades end in desperation. The major theme of these plays includes loss of self of characters, who are constantly seen struggling with their surroundings (Esslin, 3).

Since Absurdism evolved from the post-World War dramas because of the inevitable political upheaval, confrontation, anxieties and absurdities of life, it is interconnected with war, conflict and combat like terms.

Esslin comments that Absurdism shows the world as an incomprehensible place. It can be comprehended that it probably connects its roots back to a place of conflict (Echlin, 5).

This article shall deal with one such long lingering conflict zone, Kashmir and its pertinence to the Theatre of Absurd.

Relevance of Theatre of Absurd with different aspects of Kashmir

Labelled as “Anti-play” (Esslin, 3), Theatre of Absurd resonates with Kashmiri people being called Anti-nationals for bolstering their purpose and concern against the absolutism.

The people of Kashmir have been slapped with many acts and FIRs for the suspected anti-national activities. Be it sharing a simple opinion on the internet or cheering a particular sports team, the agonies for the Kashmiri people are ample.

Characters:
An important feature of this play is that characters often lack individuality and names. Most of the times they are unidentified (Zhu, 32).

For example, in a play called A Dream Play by August Strindberg, all the characters are known by their profession. They lack the sense of selfhood and are barren of any identity. These unidentified and nameless parts in Kashmir are several. Be it the unidentified graves resting in the farthest places of the valley, where thousands of unrecognized bodies lay in disfigured forms. Most of their families don’t even know that they are dead, as was weighed in by the United Nations, post the case was put up by Pervez Imroz, a Kashmiri human rights lawyer before the international council.

80 per cent of these unidentified graves are of the people reportedly abducted during crackdowns, curfews and some major uproars.

Mostly subjected to enforced disappearance, Imroz states that there are at-least 6000 unidentified graves and 1000 such places with these unspecified graves with Kashmiri people in them who will never be known (Scott). A substantial loss of disposition was faced by the Kashmiri people when Article 370 was
revoked in August 2019.

The abrogated article entitled the state a semiautonomous status, its own constitution, a separate flag and freedom to make laws, whereas foreign affairs, defense and communication remained preserved of the central government. It also allowed J&K to make its ordinances of property and fundamental rights (Pandey).

People were appalled after the verdict, as the bare minimum left was also seized with the remaining hopes lost with the system. The hopelessness and senselessness prevailed and people were left swiveling in apprehension.

Characters of theater of absurd are created with grotesque personalities and absurdities, who try to dig out their hopelessness to life and society. They often abandon the normal sense (Zhu, 35).

This stumbles with the PTSD that has been prevailing in Kashmir for decades altogether, caused by the increasing death rate, the different forms of invective and mishandling of common people on everyday basis.

Such people express and respond their emotions mainly as fear, horror, and alienation from everything around. After a point people are unable to cope up with the surroundings and occurrences.

As a result they turn helpless towards the lives they are living. This is not a concern of a particular age group but all age groups and domains of lives are equally impacted.

Plot:
When we address the plot of absurdist plays, it’s completely dissipated. There’s no sense of time, space and movement. Everything conventional is rescinded, which reminds every Kashmiri of the period post abrogation of Article 370 and the deep clampdown that followed it or even the period after various killings which has analogous aftermaths.

This communication swoon for months intensified the crisis for every living soul in Kashmir. People were startled, grew indigent, frustrated and vulnerable as they lacked any input from their loved ones whether living close to them or in a different part of the world.

People almost lost track of time not knowing what was happening, when, where and how. This blackout of all forms of communication was not new to Kashmiri people but the longest.

The clampdown lasted for about 145 days! On one hand where the whole world goes crazy when social media goes down a few moments, Kashmiris have lived this abnormal scenario for months explaining how the normalcy of the whole world gets renounced in their homeland.

Not only this, but the way people all over the world use words to express their feelings towards their rulers, it can’t be so in the valley.

Amid all this chaos, people here continue to search the meaning of their existence exactly like the characters of theatre of absurd.

Language:
Language is a notable aspect of absurd plays. Words are distorted but make sense at a deeper level. Characters are often repeating identical words again and again, but are not as impactful as they can be. Language in these plays is symbolic of the words people of Kashmir have been reiterating for decades. It represents the slogans seeking emancipation that have been echoing in the valley for years but haven’t been paid heed to, by anyone worldwide.

The requisitions for liberty are the pleas for the dead bodies to be reimbursed, wails for relatives in the jails to be acquitted, or words speaking of oppression, that echo in every street of Kashmir.

A recent case of a family begging for the dead body of their son to be returned for a satisfactory burial is there since a year now. Ather Mushtaq, 16, from Pulwama was killed in a military operation on December 30, 2020. A year later his family still repeats the same words as done when he was killed (Fareed).

Conclusion:
The senselessness of the words prevails in Kashmir for decades and lingers on till date. Esslin explains in his essay, that Theatre of Absurd shapes the world as an incomprehensible place where spectators see the happenings without understanding the full meaning and impact of these events.

This explains the way Kashmir has been in the atmosphere of brutal strife and innumerable incursions for so many years and yet the whole world becomes a mute onlooker of all the incidents.

In this harrowing ecosystem where life is secluded, startling, fretting, humans relinquishing themselves, elusive, aimlessness creeping everywhere and society dissimilating constantly, people naturally tend to have a different attitude. Meaninglessness comes at its pinnacle. Humans are left toiling chiefly to find a motive and to grasp their fate but nothing is earned except wilderness and apprehensions.

The conflict has swerved Kashmir into a world of nothingness or what we can call a Theatre of Absurd.

Zhu, Jiang. Analysis of the Artistic Features and Themes of Theatre of Absurd, Theory and Practice in Language Studies, vol.3, no.8, Academy Publisher, 2013, Finland, pp-32-35.