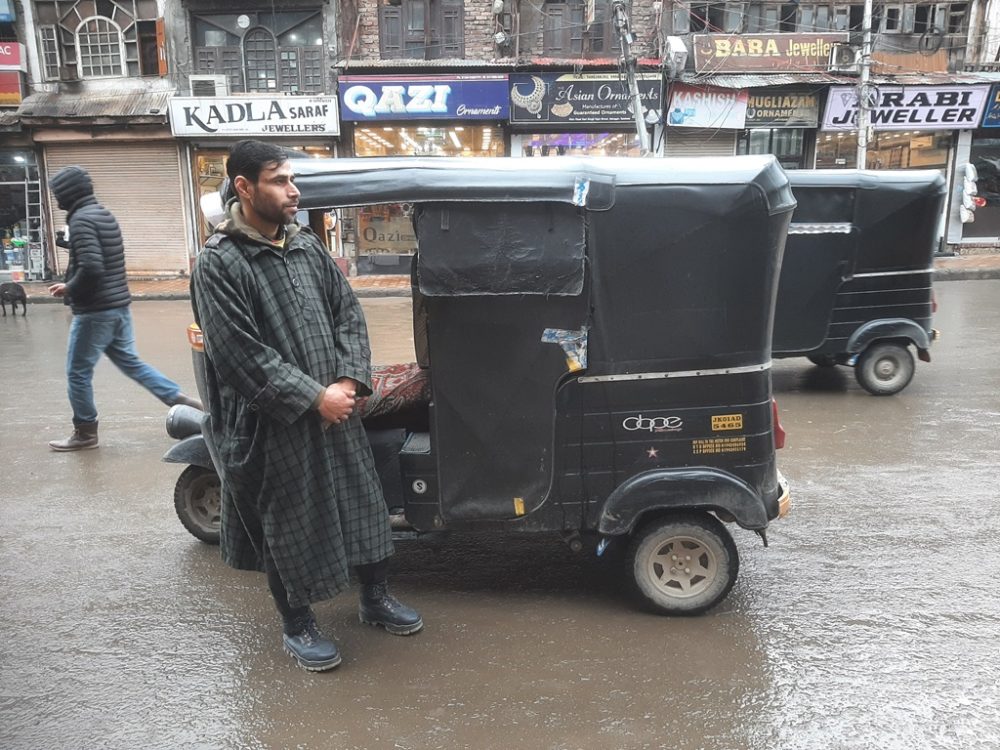 He happily ate grapes, teased his bazar buddy and smiled his way back to his three-wheeler before the deadly marketplace explosion froze him with fear.

In the ensured panic run and screams, he timidly turned around and saw the street strewn with bleeding and unconscious bodies.

Among them was his buddy.

But while others around him were running for their lives after the Sunday blast rocked Srinagar’s busy market, Sheikh Irfan Mushtaq stood his ground.

He courageously converted his auto into ambulance and ferried injured to the nearby SHMS hospital without wasting any time.

“It was mayhem all around the market,” he recalls the time when trading peaks in the bazar.

“I ferried the bleeding and unconscious people including women to the hospital in my auto. Some were writhing in pain, while others had either fainted or were bleeding through their injured body parts.”

In that emergency situation, Irfan’s prompt response saved the situation from getting worse. Barely 24 hours later, Irfan’s Auto-stand in Srinagar’s Hari Singh High Street looked shaky under the spell of fresh shower and shock. The iconic place gusted-up for the third time in past few months. These booms have beefed up the boots on the ground keeping Irfan’s tribe away from their regular stand for the day.

The young auto-driver in his early 30s chose not to run in any argument with the armed personnel when barred from stopping-by at his regular place.

“We can’t question in such scenario,” says Irfan, who hasn’t been able to get over the event of the last day from his mind. Before becoming one of the first men to turn up as a rescuer and rush the injured to the hospital, Irfan for the day had unusually walked-up to the fruit-cart of his buddy, Bilal Ahmad, and fretted him up by tasting a few grapes.

“He shooed me away once I didn’t stop,” says Irfan who along with a senior auto-driver kept the mood at the place lifted.

“Captain is what we call him,” Irfan calls the name of the noted and senior auto-driver of the place — Mohammad Ibrahim, probably driving the oldest ride with a number-plate: JKT-054.

Evenings at the place are crowded and busy, so is the rush for the passengers travelling home in autos.

“I was looking forward to the new ride when a loud bang turned everything off,” Irfan recalls the deadly din.

Before he could get back himself to senses, the marketplace had turned into a chaotic place where everyone was trying to run for life.

“The first thing to catch my eye was our ‘Captain’ trying to lift an injured person into his old auto,” Irfan shakes his head while speaking of the scene.

But of the persons lying on the ground, Irfan was shocked to see Bilal Ahmad, the fruit-cart owner, on the ground.

“He was profusely bleeding from his neck,” he recalls. “But without caring for his injury, he joined me in rescuing others.” By the time Irfan and his co-drivers as first line rescuers had rushed the injured to the hospital, the ambulance and the official response to the spot cleared the rest.

It was only then the auto-drivers went up to their respective rides and looked if there were any damages apart from the blood spilled on the seats.

“Apart from me and Captain’s auto, the rides of others had small and big cracks and scratches,” says Irfan who was patted at the back by the veteran driver himself for ferrying his bleeding brethren to the hospital in no time.