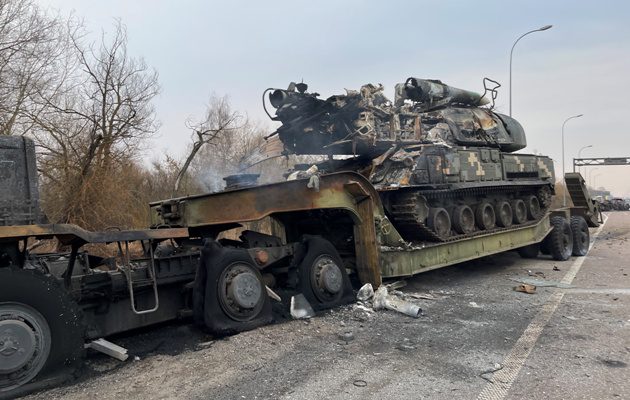 The wreckage of war on the road in Ukraine capital Kyiv as the country’s military convoy including an air defense missile system was hit by a Russian missile strike on February 26, 2022. The convoy was heading to Kyiv to help defend the city. [Photo: Twitter/ Orla Guerin]
Share
Tweet
Share
Share
Email
Comments

Ukraine’s President Volodymyr Zelenskyy has urged British MPs to designate Russia as a “terrorist state” after Russian President Vladimir Putin ordered what he calls ‘a special military operation’ against his nation and called for tougher sanctions on Moscow to “make sure our skies are safe”.

The 44-year-old Ukrainian leader, who made a “historic” address to the House of Commons via videolink on Tuesday, received a standing ovation by members of Parliament, news agency PTI reported.

“We are looking for your help, for the help of Western counties. We are thankful for this help and I am grateful to you, Boris,” said Zelenskyy, addressing British Prime Minister Boris Johnson.

In an emotional address, Zelenskyy invoked Britain’s war-time Prime Minister Winston Churchill’s words, promising to fight Russian troops in the air, sea and on the streets.

“We will not give up and we will not lose, we will fight until the end, at sea, in the air… we will continue fighting for our land. Whatever the cost…we will fight in the forests, in the fields, on the shores, in the streets,” the report quoted him as saying.

In his address, Zelensky gave a day-by-day account of the attack by Russia, which began a fortnight ago.

He described how it was a war Ukraine “didn’t start and we didn’t want”, but his country now had to fight.

And quoting Shakespeare, he said the question for Ukraine is “to be, or not to be… it’s definitely yes, to be”.

He concluded his speech by saying: “Do what you can, do what you must, because greatness obliges greatness, of your state and your people.