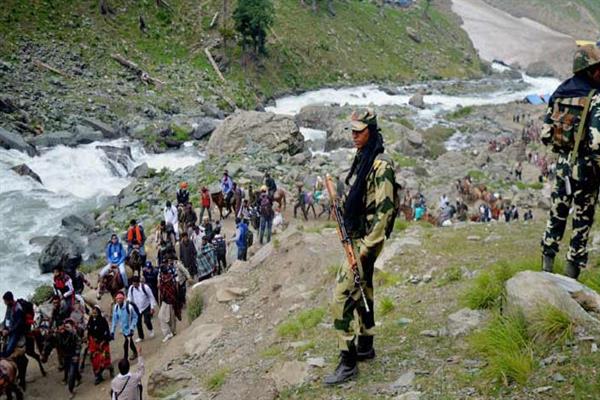 Jammu: Lieutenant Governor Manoj Sinha on Thursday reviewed the preparations for the annual pilgrimage of Amarnath in a high level meeting held at Raj Bhavan.

During the meeting, the Lt Governor stressed that all the work of yatra arrangements should be completed within the set timeline. He also called upon the officials to ensure optimum use of technology to make the yatra safer and more convenient for the pilgrims.

Pertinently, this year, the government is introducing RFID system for pilgrims to track their movement en-route to ensure their well-being, besides upgrading telecommunication channels to ensure better connectivity for the yatris.

Concerned Administrative Secretaries and Deputy Commissioners briefed the Lt Governor about the up to date status of Yatra works within their jurisdiction.

It was informed that maximum of the works are completed or near completion. Divisional Commissioner Kashmir apprised the meeting that around 7500 registrations have already been done for pony service.

Deputy Commissioner Anantnag apprised the chair that all the Yatra related works in his district shall be completed by 15 June.

Similarly, Deputy Commissioner Ganderbal also briefed about the status of completion of works. Up to date status of health facilities enroute to holy cave and progress in establishment of the Tent City were also discussed in the meeting.

The Lt Governor further issued directions for giving highest priority to cleanliness and convenience of the yatris arriving for Amarnath yatra-2022.

Chief Secretary, Dr Arun Kumar Mehta impressed upon the concerned officers to immediately remove any impediment in the completion of any work pertaining to Yatra.

Meanwhile, the Lt Governor congratulated the local people and the officers of UT Administration for their efforts in ensuring smooth and harmonious conduct of Mela Kheer Bhawani. Role of the local population is being greatly appreciated across the nation and the world, he said.