‘We can have days or weeks in a year dedicated to language celebration—a method used by many south Indian states—to reclaim Kashmiri.’

On an early summer morning in Kashmir, a recently published author sat down for a four-hour interview about his writings and himself, tracking his life experiences.

The previous year’s release of Syed Mohammad Yousuf Andrabi aka Ajiz’s book was the last and only publication in two years. The Cultural Academy of Kashmir has not published any new books since then.

“Hasil-e-Hayat”, a collection of poetry, was hoven at the Academy on November 10, 2021, and has since received pervasive acclaim.

Ajiz, the book’s author, avers that the rejoinders have been mixed because his book is an amalgamation of various panes of poetry. He is, however, pleased with the results and plans to continue working in the field.

A state residentiary amenable, Ajiz has been writing for the past 60 years. He has worked in multitudinous government and private sectors throughout his career, and each, he claims, has added a brick to his house of musings. Ajiz was born in 1946, in a small village near Budgam called Keach Razgeer. Living with a family of more than eight, his early years were arduous, yet the only constant in his life was education. His inclination had always been toward language, and that is how his journey with the Persian began at home.

After graduating from a government school in Keach in 1958, Ajiz relocated to Srinagar to further his education. He was admitted to Oriental College Jamia Madeenat-Ul-Aloom Srinagar and studied Arabic, Persian, Urdu, and Kashmiri.

“Most of what I learned in Persian came from my elder brother at home,” Ajiz explains. “He taught me poems by Sheikh Sadi Sheerazi, Moulana Jami, Firdousi, and many other authors.”

His teachers were among the best that the valley had to offer in each language. “I learned from Hazrat Moulana Mohammad Kasim Shah Bukhari, Moulana Abdul Ahad Jami, and others,” he continues.

College taught him Ghalib, Iqbal, Momin, and Krishan Chand, but Ajiz learned Rahi, Azad, Kamil, and Mehjoor through life—both through their writings and through meeting them.

“Many well-known authors who made their names were all my contemporaries at one point,” Ajiz says. Some of the names he recalls off the top of his head are Amar Chand Wali, Farhat Geelani, Shabir Budgami, and others.

Besides writing, Ajiz worked as a press photographer for almost fifty years at the State Information Department after graduating from college.

He accompanied officials to political gatherings in his formative years and, in his capacity as a press photographer, documented a number of “momentary pleasures” that were featured in reputable publications. In the 1970s, Ajiz was juggling his career with his love of writing, but in the middle of it all, his health began to deteriorate, forcing him to take a five-year break from everything but writing.

Before the pause, he penned poetry in the 1980s and 1990s, and that is when the majority of the works in his current collection have their origins.

His early works from the 1960s have a Marxist undertone because that was the widely held belief associated with the burgeoning Progressive Writers Movement at the time.

His writings follow an unwavering line of thought in which the main character timely associates and disassociates himself from the story. An example of such is an unpublished essay written on a cow. 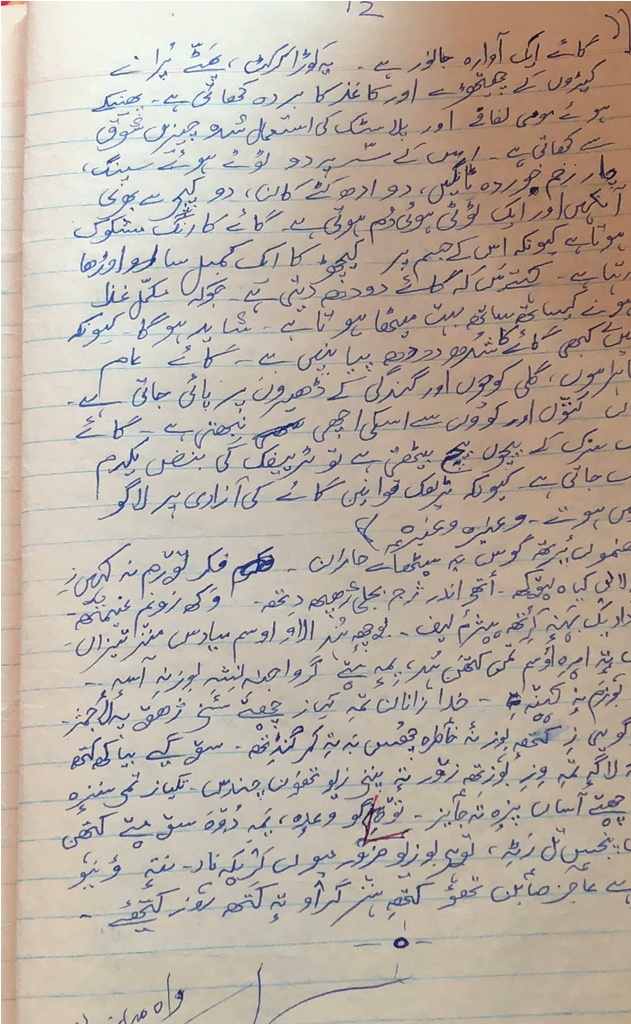 Ajiz has anonymously written prose and poetry for multiple newspapers since the 90’s, one of which is the Daily Chattan. Furthermore, he, back in the days, also used to write couplets about the social, political standings and popular notions of the valley and would read them in mushairas and other gatherings. One of these poems made its way to his published book “Hasil-e-Hayat” and is called “Hess Kar.”

The recently published book has given “new life” to all of Ajiz’s previously unpublished works. “So many of my works were abandoned and deemed to be dead for a variety of reasons,” he says. “I’m glad I’m giving myself a platform to criticize and rebel through my book.”

The book is a compilation of various writings, such as ghazals, nazams, rubais, mazakhias, etc., collected over a 50-year period. These pieces explore life from Ajiz’s point of view, discussing the social, political, personal, and natural aspects of continued sustenance in a territory like Kashmir.

After retiring from the horticulture division in 2005, Ajiz immediately accepted a position as an assistant editor with the newspaper Uqaab. For the next five years, Ajiz published a newspaper column called “Namak Pare” that was well-liked and helped him develop a small reader base.

“There is a dearth of readership in Kashmiri,” he believes. “Those who read also know the language through writing; that is, writers.”

There should be inkling towards the Kashmiri language, he says, which is something one lacks in this day and age. “And this is a reason for the hostility towards the language,” Ajiz says. “Kashmiri language became associated with class somewhere along the way, which is one of the main reasons for its declining rate.” The language that was once spoken by many is now associated with only a specific class, he rues. “These days, parents and family members begin conversing with their children in Urdu and English,” Ajiz continues. “The consistent use of Urdu and English overshadows the lack of use of Kashmiri language at the stage when children are like sponges, when they can actually pick up a concrete base of a language, and this is one of the root causes of the steady decline that we see in Kashmiri readership and writing.”

Looking at the states that use Dravidian languages, Ajiz claims that it is admirable how persistently the community and the government encourage the people to continue speaking their native tongues. He believes that celebrating the language is the only way for today’s generation to reconnect with Kashmiri.

“We can have days or weeks a year dedicated to language celebration, where all of us as responsible preachers talk about Kashmiri, its authors, scripts, translations, and so on,” he says. “This is a method that many south Indian states have also used. Karnataka, for example, has reclaimed Kannada as their mother tongue in such a way that schools, colleges, office spaces, and other community spaces, including social media, mass media, and so on, celebrate the language by observing a holiday and making participation in language-related events mandatory—Karnataka Rajyotsava. In these ways, a language can be resurrected.”

Kashmiri is one of the valley’s recognized official languages, but the lack of language usage in official documents and related material is another reason why people have abandoned the languages and adopted new ones.

“There are methods for keeping a language alive,” Ajiz says. “It is not about government initiatives and public responses; it is about identifying and addressing the underlying issues in ways that make language interaction mandatory.”

Adaptations of plays, old Kashmiri songs and dramas, he says, are a very progressive way for the language to be reclaimed, as media is the forte of youth.

“The generations must understand what the words mean and how to use them in various contexts, which can be taught to them by the learned. Therefore, it is imperative to consult language experts before adapting anything.” In his writings, Ajiz skilfully employs language. His words frequently have double meanings, prompting readers to comprehend the writing as well as read between the lines to discover the hidden meaning.

Some of the published poems in the book follow this pattern, causing readers to “think twice before reading further”.