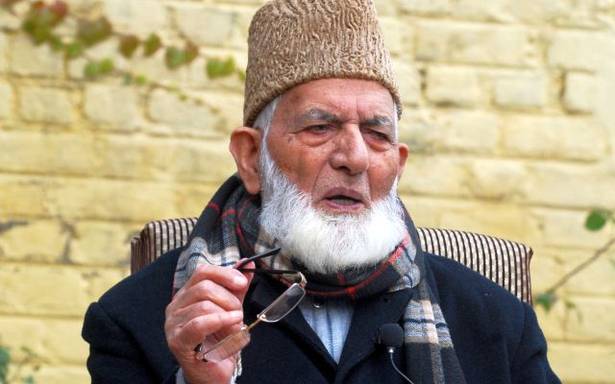 All Parties Hurriyat Conference (APHC) spokesperson, Ayaz Akbar, told the FreePressKashmir that a police party from Bhaderwah, accompanied by cops from Humhama police station, had come to arrest ailing Geelani in a case registered against the APHC chief in 1989.

A court in Bhaderwah had issued the arrest warrant against Geelani.

Geelani was part of Jama’at-e-Islami J&K in 1989. He headed the political bureau of the state’s largest socio-politico-religious organisation and he would address people across J&K.

An FIR No. 169/89 is registered against Geelani in Bhaderwah police station.

“The cops told us that they had come to arrest Geelani,” Akbar added, “Geelani responded: I’m ready (to get arrested).”

Geelani, it may be noted, is undergoing house detention currently most of the time since 2010. Two big vehicles carrying cops and CRPF personnel are stationed against the main gate of Geelani’s residence.

The police party arrived around 2:30 pm yesterday at Geelani’s residence-cum-office in uptown Srinagar.

“After some conversation within themselves, the cops told us that they will have to seek permission from their higher ups,” Akbar further said. “Then they left and did not return.”

A police official in know-how of the development said that the Bhaderwah police party returned home. “Geelani is not keeping well,” he said without sharing too many details.

Lashing out at the government, the Hurriyat Conference spokesperson said that the arrest warrant is a mockery of the court as Geelani was “already under house arrest since the last seven years”.

He said that the Jammu and Kashmir is a “police state” where courts are being “dictated” by the government.