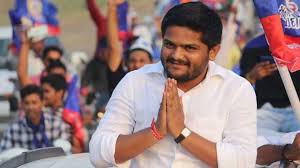 New Delhi: Hardik Patel, the leader of the Patel Community known as Patidars on Wednesday said that they have accepted Congress Party’s formula of giving reservation to them at par with the Other Backward Classes.

Patel, the convenor of Patidar Anamat Andolan Samiti (PAAS), who is being wooed by the Congress for a partnership in the upcoming Gujarat elections, said, “We accept formula given by Congress party to give reservation at par with OBC to non-reserved categories.”

He added, “Congress people are not our cousins, but when they speak about our rights we have to listen to it. And the formula they have offered is plausible.”

Patidars were met with arguments from several opponents in the past that total reservations cannot be over 50 per cent. However, quashing such arguments, Patel said: “Nowhere in the Indian constitution it is written that more than 50 per cent reservation cannot be given.”

Showing confidence in Congress’ promise, Patel said, “Congress has promised to put its formula to give reservation to non-reserved categories in its election manifesto.”

“I am not ‘bikau’. Otherwise I could have accepted offer of Rs 1200 crore from K Kailashnathan (Chief Principal Secretary to Gujarat CM Vijay Rupani) when I was in jail,” Patel alleged.

Patel declined speculation that he is joining any party or that his outfit has asked for any seats in a coalition in the upcoming polls, he said, “We have never appealed to anyone to vote for Congress, but since they are talking about our rights, we leave it on people to decide.”