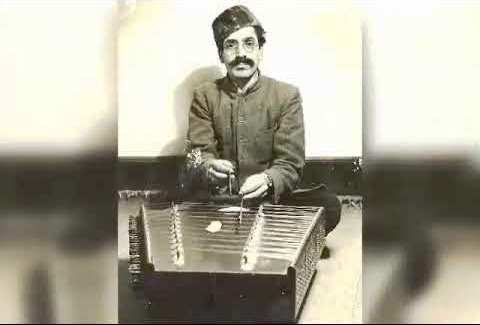 Thirty six years after his passage, Ustaad Muhammad Abdullah Tibetbaqal continues to evoke nostalgia, whenever his musical renditions make it to the radio waves. The legend became a household name after he enthralled Kashmir with his voice and Santoor symphonies for many decades.

Kashmir owes much of its cultural practices to Central Asia, and many known families have their roots there. One among the famous families, counted as one of the reputed business families of the Kashmir valley, having Pashmina-trade relations with Central-Asian countries like Yarkand, Samarkand, Bukhara, Tibet, Gilgit, Askarud, Tajikistan, and Russia, were Bota Wanis (Buddhist Traders), now known as TibetBaqals.

Their connection with the trade and business, amalgamates with the flow of tradition, owing to their Turkish origin. They came to Kashmir with the arrival of Hazrat Syed Sharif-ud-din Abdul Rehman Bulbul (RA) accompanied by spiritual travellers, during the reign of King Sahadev in 1320 AD. They owned a seven-story house at Bodhgair, in Old Srinagar, which was then designed according to the Central Asian architectural techniques.

A turning point in the family history was the birth of Ustaad Muhammad Abdullah Tibetbaqal alias Abl-e-Saab on July 03, 1914.

Abdullah received his initial education through the conventional mode of learning in the Theologian school of Hazrat Moulana Maqbool Sahib (RA) situated at Buch-Mohalla, Rajouri-Kadal, Srinagar and then for formal education, he was admitted in Mission School situated at Fateh-Kadal, Srinagar, now known as Tyndale Biscoe School of Srinagar.

As a child, Abdullah used to play with wooden planks, arranging them in a definite symmetry, and then making sounds out of them. Everything he got his hands on, was a music-making opportunity for him. He used glasses and plates to make different rhythmic sounds.

As he grew up, his interest in music grew too. But, being from a business household, his family did not allow him to pursue music as a profession. That did not stop him from putting in efforts, as his love for music was ‘above everything else’ for him.

He went against his family’s preference and purchased a Santoor, and started practising the 100-string dulcimer. Being an ‘obedient child’ he also extended a helping hand in the family business.

The family says, he used to accompany his father to central Asian countries, which subsequently made him an expert in Persian, Ladakhi and other languages. Tibet Baqal during a performance.

The transit and the composite cultural environment in which Abdullah grew was scented with religious fragrance, and this proved to be an inspiration for his platonic devotion. He attended the mystic gatherings of religious scholars practising the Sufi tradition of Islam.

This became the triggering point for him, which created a place of fondness for Sufi-music in his heart. All his knowledge, with regard to music, was only based on observation which he gathered from the Sufi Mehfils.

According to his only son Mohammad Ashraf TibetBaqal, whatever his father achieved in the artistic field, was purely the Creator’s gift and sincere prayers of his well-wishers.

With the advent of Radio Kashmir in 1948, it was felt that the local artists of Kashmir should be promoted and Abdullah’s name was recommended.

But to surprise of many, he rejected the offer.

It was the then Deputy Prime Minister of Kashmir, Bakshi Ghulam Muhammad, Sadruddin Mujahid, and Chatter Ji, then Director Radio Kashmir, who insisted and asked him to take up the job. He finally agreed and took up the job in 1948. He was offered the highest payment of Rs. 150 per month, against the other AIR-Staff artists who were given only Rs. 60 per month.

He rose to become as one of the most successful vocalists and composers that Kashmir has produced so far. His brilliant performances-cum-compositions in the 20th Century are renowned, and known all over the world, earning him the famous title, “King of Santoor”.

During his Radio Kashmir tenure, Abdullah was also honoured with the title “TibetBaqal”, as a mark of honour in terms of dignity, reputation and recognition for his musical skills and services. TibetBaqal during a performance in 1951.

According to his son, he was a self-taught genius who composed a large number of Sufiyana Kalaams and Leelas, and with his extraordinary creative faculty, he for the first time, infused Kashmiri Sufiyana music and Indian Classical music with Kashmiri folk.

Then, Santoor was predominantly used as an accompanying instrument in making music. But it was Ustaad Tibetbaqal, who, for the first time introduced it as a lead instrument in solo-music. The archived tapes in possession of All India Radio/Sangeet Natak Academy, Doordarshan Mandi and private library of Ustaad TibetBaqal are a testimony to this.

In 1944, Taj Company of Lahore recorded Instrumental Santoor Solos of Ustaad TibetBaqal, besides other recitations, and archived them for preservation. In 1950’s for the first time, All India Radio broadcasted Sufiyana/Santoor – Wadan of Ustaad TibetBaqal at the National level.

Besides these, many well-known people like Dr Rajendra Prasad in 1953 invited him to listen to his magical art performance of Sufi-music and Santoor-wadans.

Similarly, many renowned people like Dr Ruhullah Khaliqi (Director-National School of Music, Tehran), who honoured Ustaad TibetBaqal with the title of Hassan and Khan Habib (grand Santoor Maestros and Musicologists of Iran) for his artistic caliber, have endorsed his art. Even Jawaharlal Lal Nehru, Indira Gandhi, Dilip Kumar and Syed Kaiser Qalander (Former DDG-AIR) were his fans. It’s said that when the renowned singer and maestro Muhammad Rafi came to Kashmir for TibetBaqal’s magical performances, for the first time at Polo-ground and then at Tagore-hall, Srinagar, he took the skilled and art-crafted hands of Ustaad Tibetbaqal in his own hands and kissed them.

The Santoor legend won many awards too. He won his first award in 1972 and became the First Person from Jammu and Kashmir, to receive the Sangeet Natak Academy Award. He was honoured with a Robe of Honour by Jammu and Kashmir Academy of Art, Culture and Languages, Pride of Performance, Kala Kendra and Golden Jubilee Award – All India Radio by the Ministry of Information and Broadcasting, besides other prestigious awards. He passed away in 1982 and the musical legacy was passed on to his grandson Adil TibetBaqal, who heads the Santoor department of the University of Kashmir.

Adil has succeeded in keeping the legacy alive and now is all set to pass on the mallets to the fourth generation who will be the youngest in the family and the state to play the 100 string dulcimer.