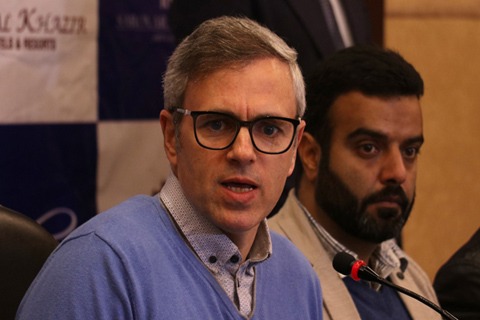 Srinagar: Omar Abdullah, Vice President of the National Conference while addressing a rally in Pulwama has said that he ‘understands the helplessness, despair and anger of the people here’.

“The people of Pulwama have got nothing over the past four and half years. I can understand the helplessness and despair that is writ large on the faces of people here,” Omar said while addressing the party workers at Mujahaid Manzil in south Kashmir’s Pulwama district.

Omar added that PDP, for whom people voted in 2014, used those votes to get into power. He urged the people to vote for NC’s candidate from Anantnag Parliamentary Constituency so that New Delhi could be held ‘accountable’ for whatever they have done here.

On Tuesday, Omar reiterated that his party would scrap the Public Safety Act (PSA) if voted to power.

“No mother will have to look for their children in jails if we are voted to power and for it this parliament election would serve as a semi-final,” said Abdullah while addressing a poll rally at Circuit House in south Kashmir’s Shopian district.

Recently Omar had said that that his party will quash all the cases against the stone pelters if the party is voted to power in the next assembly elections.

Omar had also said recently that if his party comes to power, within days the Public Safety Act will go.