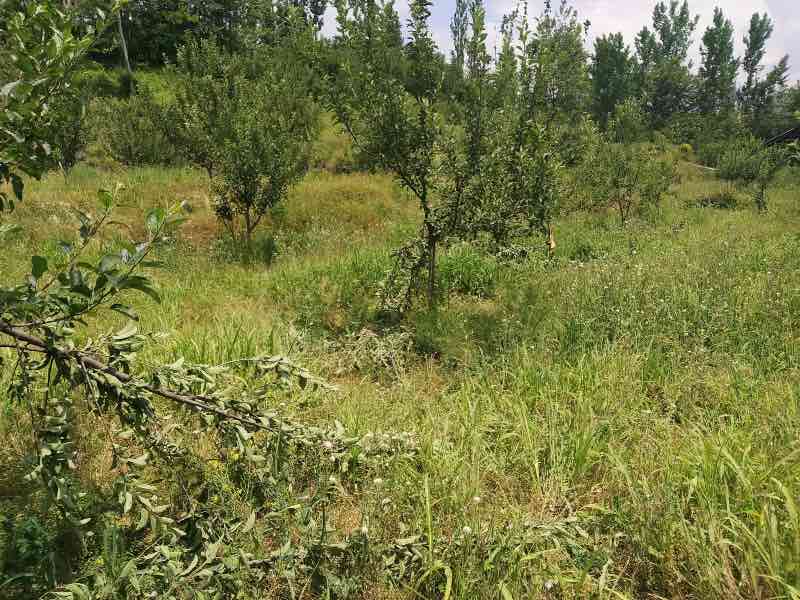 Unidentified persons are chopping down trees in the dead of the night, police registers case

Srinagar: Amid an economic crisis during the COVID-19 pandemic, the orchardists from South Kashmir’s Anantnag have new battle. In a mysterious incident, more than 350 apple trees were destroyed in the past few days.

The police lodged an FIR in the case, but the incidents keep happening in Mehand village of Bhijbehara in Anantnag.

Apart from the huge economic loss, the owners say it will take them 10 more years for an apple tree to grow and be fruitful to them. Around 10 orchardist families are in distress due to the incident.

Locals say the no one in the villages dares to go out during the night, because of the tense situation in the region, and these incidents have left them worrying.

Speaking to Free Press Kashmir Obaid Bhat, an apple orchardist said that some unidentified persons have been cutting apple trees for past three days in the dead of the night, when every one is locked up indoors. “Initially, they had broken branches of around 20 trees. We thought of it as a minor isolated incident. The next day, everything was fine. However, the morning after, we saw that trees we had planted around 3 years back were completely destroyed in our orchard. And the two orchards adjacent to us have suffered a loss of more than 25 trees that have been growing for the last 7 years,” says Obaid adding, “my father broke down when he heard the news.”

Yesterday, says Obaid, nothing had happened. However, today, in the morning they witnessed that more than 50 more trees had been destroyed in around 4 more orchards.

“In three days, alternatively, from all sides of the orchard, the trees were cut down. At present, it is a loss of around 1 lakh rupees. However, if you calculate how many apples we could have sold over the years, the loss is unimaginable,” he says. “A tree is like a child. Imagine you love and nourish a child and when he reaches an age where he can help you, someone comes and kills him. For the past 7 years, people had been growing them: fertilizing, watering and doing labour. In three years, they would give us apples. Now, we have to wait for 10 more years again. One tree fetches us around 20-30 fruit boxes that we sell on an average of Rs 300 each,” informs Obaid adding the incident has added to the mental agony of the locals of the village.

The locals are normally not on guard given such an incident has taken place for the first time in the area. At best, someone will steal one fruit box from them, they say.

Asked if it can be a personal rivalry, locals say, “the rivalry could have been with one family. We are around eight different families with no connection to each other. Also, the locals do not leave home after 7 pm due to the tense situation in the district.”

SHO Srigufwara confirmed the incident saying, “police station Srigufwara has lodged an FIR No. 38 of 2020 in the case. In the wee hours of the night, small apple trees that had been grafted were broken. It could easily be done with hands given the grafted part is fragile. So far two families have registered the case with us. We are looking into the matter. Within around 2 days, we will come to a conclusion.”