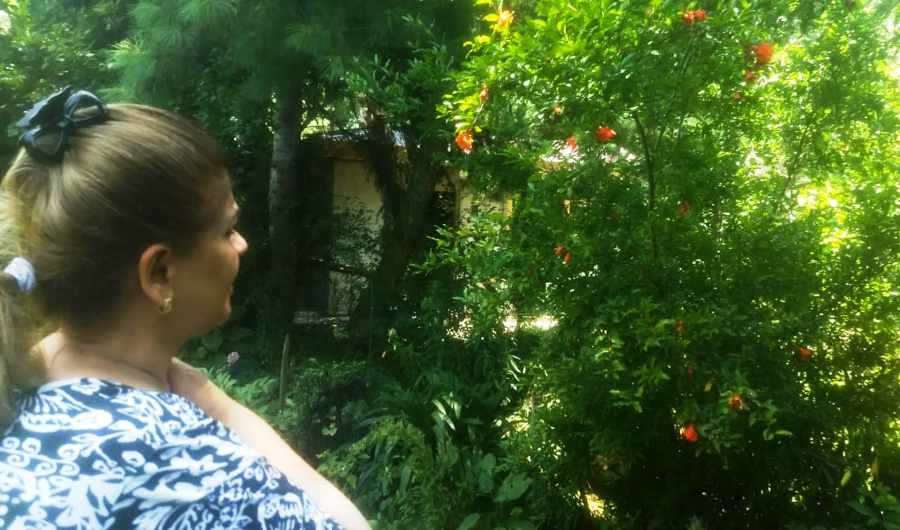 After losing her ‘fruitful’ home to war, an Iranian woman landed in a conflict zone as a bride of a Kashmiri medico. Although the move proved proverbial—out of the frying pan into the fire—years later, her fruits of labour have become her brand new identity.

It was a late summer day of 2020 and she was recalling her young avatar as a happy-go-lucky girl in her hometown tucked in tranquil Persian pasturelands.

She remembered picking up the fruit in her tiny wicker basket one day for her mother’s jam-making routine.

As she plucked the round grapes, tossing one into her mouth, she felt immense joy. But that delight turned dread, when suddenly the earth beneath her feet started shaking. She felt as if a streak of lightning flashed across the clear blue sky.

This was the beginning of the war in Abadan city of Iran in 1980.

In September that year, Abadan was almost overrun during a surprise attack on Khuzestan by Iraq, triggering the Baghdad-Tehran showdown.

For 12 months, Abadan was besieged, but never captured, by Iraqi forces. Finally, in September 1981, Iran broke the siege over Parvin’s homeland.

Much of the city, including the oil refinery, which was the world’s largest refinery with capacity of 6,28,000 barrels per day, was badly damaged by the siege and shelling.

Prior to the war, the city’s civilian population was about 3,00,000, but at the end of it nearly the entire populace was uprooted and scattered in different parts of Iran as refugees.

“Unfortunately, we too lost our home to the war and had to shift to Tehran,” the Persian woman recounts.

In the capital city of Iran, Parvin’s family resided in an apartment with no spacious garden and fruit trees like her war-torn home.

“The longing for home is painful,” she recalled. “We used to grow grapes, cherry, figs, kiwis, quince apples and apricot trees there.”

The evening strolls around the trees and the ringing laughter echoed in her ears.

“I yearned to go back to my war-ravaged house every now and then,” she said.

However, the pain-inducing war memories were subdued to some extent when she began to learn the subtle art of making fruit jam from her mother.

“I spent the second part of life in Tehran where I learnt the recipe from my mother,” she recounted. “This activity made me feel closer to home amid my beloved trees.”

In Tehran, Parvin pursued further studies. She did a three-year nursing course from Institute of Nursing, National Iranian Oil Company and later pursued a job in the same institute. In 1985, she got married to a Kashmiri doctor and came as a Persian bride in Old City’s Safa Kadal locality.

She would later shift to Srinagar’s uptown area of Nishat, where she resides currently.

“I had never foreseen a war-like situation would also emerge in the valley,” Parvin said. “Tensions simmered during the 90s and life was caught at the cross-roads again.”

But her love for jam-making came handy and saved her from the anxieties of the long curfews and dreadful crackdown days.

The home-made jam has been displayed at pop-ups held in Sarovar Portico, and Hotel Akbar Srinagar, The Lalit, and SKICC, Srinagar.

“My recipes are distinct from others because all the fruits are handpicked from my garden,” she informed.

Based on an overwhelming response to her jams, Parvin has also included the sugar-free alternatives. But, as no journey is smooth sailing, regular hiccups did threaten to derail her endeavours.

However, Parvin credits her son, Arshan, for encouraging her to pursue her hobby and turn the jam-making into a full-fledged venture.

The main challenge for her was the acceptance of people towards home-made jams in Kashmiri culture.

“I want people to understand that it is handcrafted, painstakingly made through a slow process in small batches using authentic ingredients,” she said.

“The niche category of food is synonymous with quality, care and the good old-fashioned human touch, and all of it comes at a price, but gives both tangible and intangible benefits: from better food to a feel-good factor.”

Parvin believes that the consumption of her jams is essential in today’s world of commercially available products laden with preservatives.

“There is a mounting desire for food products that are ‘pure’ and haven’t been tampered with at any stage of production.”

The use of indigenous produce, she stressed, is a great trend.

“It’s not just that eating these fruits through jams in the right season has great nutritional value, it also helps those who grow these fruits, and in turn, helps us rediscover these unique flavours,” she said.

“It also helps us reintroduce diners to fruits they may not have tasted since they were children.” After war, as the Polish poet Wisława Szymborska said, someone has to clean up, for war leaves scars that refuse to heal, and the corpse laden wagons leave trauma that refuses to be wished away.

After constant, unrelenting fear and all the tumult and turbulence, someone must pick up the gauntlet and find joy again in small pleasures that will provide meaning to darkened existence, and shine a glimmer of warm hope in the cold darkness.

Living by these words, Parvin as a poet in exile has found her heart in her mother’s jam-making routine, a muse and a memory lost in the mist of time.

And yet, the August siege of 2019 nearly wiped off the memory again.

Shirin Foods had grand plans for expansion. It was going to be registered as a full-time company. However, the revocation of Jammu and Kashmir’s semi-autonomous status under Article 370 and 35-A on August 5 put paid to the plans.

“My son Arshan working abroad was moving towards the end of August in 2019 to Kashmir for expanding our home-grown business,” she said.

However, after August, the plans never came to fruition and remained nipped in the bud.

Now, the brand is slowly getting back on its feet. Due to the ongoing pandemic, Parvin has restricted the jam supply to family and friends for now. She hopes to revive it once the tide turns for the better.

“The future after all belongs to those who believe in the beauty of their dreams,” she concluded with a smile.