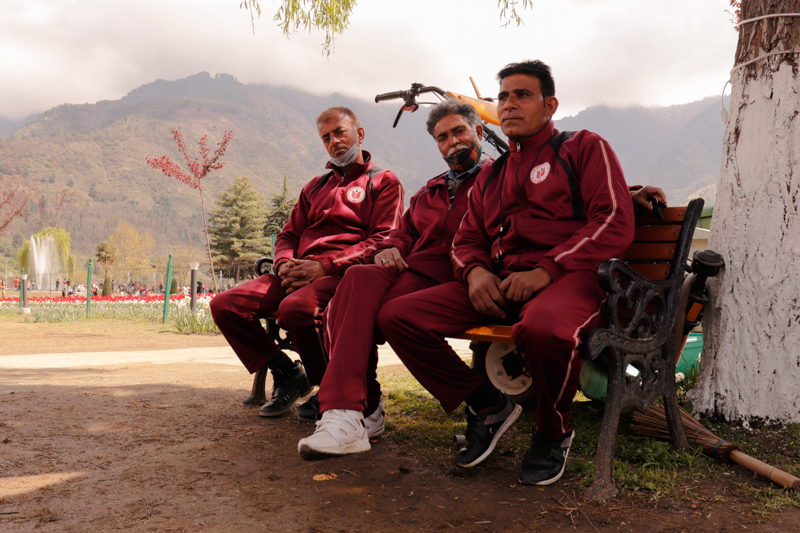 Engaged for preparing flower beds for sightseers, the landscape technicians of tulip garden are voicing their existential concerns amid the feverish rush.

Sitting on a green bench under the shade of a tall tree, three floriculturists—Mohammad Sultan Bhat, 50, Mohammad Amin, 44, Rafiq Ahmad, 35—are warmly greeting the eager tourists in a unique dialect of mixed Kashmiri and Urdu language.

“These tulips are like our children,” Rafiq tells the sightseers. “We sow and grow them like parents.” “The process of planting tulips never ends,” says Bashir, as he deweeds a tulip soil bed on a warm afternoon. [FPK Photo/Zainab Mufti]

The trio is the part of over 120-gardener team hailing from different areas of the Kashmir valley.

They toil with their sweat and blood, around the year, to make the glorified garden bloom with 1.5 million tulips of 62 kinds, for the 30-day flowering season. Among them, while 40 are permanent employees, the rest are working as casual labourers, contractuals and daily-wagers.

A majority of them are being paid ‘peanuts’ for their endless enthusiasm towards this work by the government. A gardener preparing a bed of flowers in Tulip Garden. [FPK Photo/Zainab Mufti]

During the PDP-BJP coalition government in 2018, these gardeners were promised that those with over 10 years of working experience would be regularized.

But as the coalition disintegrated that summer, following a seasoned scribe’s assassination in Srinagar, their concerns remain buried.

“I have been working here for more than 12 years and drawing just 6,780 rupees a month,” says Shabir Ahmad, a 34-year-old casual labourer. “This is travesty, but most of us have no alternative.” Sailing in the same boat, Abdul Majeed, a well-built gardener, travels 40kms to Srinagar every day from his hometown Gutul Bagh in Ganderbal area.

“Whatever I earn gets spent on my travel,” Majeed says.

“My children are growing and the income is negligible.” Inam-ul-Haq, In-charge of the Department of Floriculture, Gardens and Parks, says regularizing process of gardeners ‘with more than a decade experience’ is a process that is ongoing.

“An SRO has been framed for those daily-wagers, and documents have been sent to the Directorate of Floriculture, Kashmir,” Haq said.

“Whoever fulfils the criteria will be regularized.” “Whatever I earn gets spent on my travel expenses, my children are growing and the income is negligible,” Majeed says. [FPK Photo/ Zainab Mufti.]

Before becoming an address of tulips for the tourists, this 30 hectare garden space girded by the Zabarwan hills was called Siraj Bagh that grew glodi, cut flowers, fruits like pears, apples, and dry fruits like pistachios, dry apricot and almonds. “We constantly work on soil, foliage, bulbs and beds. In the process of growing tulips, cooler temperature, sand and moisture are its vital elements.” In May, removal of foliage starts as the greenery turns golden till June. Floriculturists then carefully remove bulbs until August ends.

“From September to October, we work on the formation of soil; make beds, use tractors and pesticides for fertility. By November, we sow the seeds.” Tulips are native only to mountainous areas with mild climates and need a period of cool dormancy, known as vernalization.

“Like this year, if the bulbs come late from Holland, then we plant them in February,” Bashir says. “The endurance begins with removing the snow first. Then making beds and after that planting bulbs and recovering it with snow again. Snow helps to keep the moisture intact which doesn’t let funguses consume a tulip and sand helps to keep a tulip loose in soil for secure exclusion.” “These Tulips are like our children, we sow and grow them like parents,” a gardener said. [FPK Photo/Zainab Mufti]

Praising the toiling efforts of floriculturists, 45-year-old Mushtaq Mir, who supervises the functioning of the garden, believes that “the causal labourers can be terminated anytime” and even the recently appointed employees under SRO 520 are subjected to grave injustice.

“In the recent GSA order, the government approved contractual regulation of few gardeners in which no provident fund, GP fund or pension is mentioned, except a meagre salary of Rs 10,000,” Mir says. “Our union which represents us is divided and the officers are corrupt,” Mohammad Ashraf, 45, said. [FPK Photo/Zainab Mufti.]

In March 2020, a short exam was conducted under State Selection Board (SSB) and people from B-Tech, Arts and Commerce fields were appointed as new gardeners here, informs Mohammad Ashraf, a 45-year-old gardener.

“Look at these tulips! Some of them look so lifeless. It’s because they are grown by people who know nothing about them,” says Ashraf, gauntly. During Covid, the gardeners are only going extra mile. [FPK Photo/Marila Latif.]

It will take more than 4 years for them to learn how to cultivate tulips, Ashraf continues.

“And experts who are doing it for decades are hanging on the ridge and are uncertain for their future.”

Haq says he holds no authority to talk on the SSB examinations, “because their prescribed qualification and criteria are decided by the administration”. However, Farooq Ahmad Rather, Director Floriculture, says that the recruitment process operates through a separate government wing – SSRB (Service Selection Recruitment Board) and the criteria is to have qualified 10th standard and a gardening degree in hand.

“Else, engineers and graduates were appointed because they chose to give the exams,” Rather informs. Sitting on the bench, the trio of Sultan, Amin and Rafiq are happily hosting the guests arriving in droves despite a resurgent COVID phase.

“It feels nice when your garden is being praised and becoming a priceless memory for these tourists,” Rafiq says.

“But at the same time it feels terrible to live with job insecurity.”