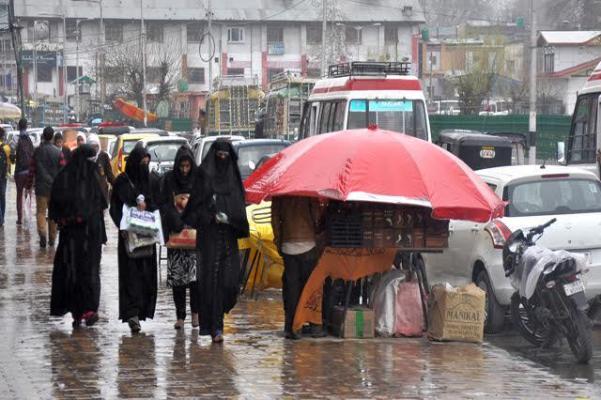 Srinagar: Weatherman has forecast light to moderate thundershowers with rain and lightning over Poonch, Rajouri, Shopian, Gulmarg, Uri, Tangdar and south Kashmir districts during the next 2-3 hours.

Regarding Ladakh, the officials said that the weather will remain partly to generally cloudy throughout the region.  “No forecast of any significant Weather in coming days,” he added.

Meanwhile, The India Meteorological Department (IMD) has predicted heavy rainfall on Friday in several areas of the country as it said a low-pressure area has formed over the northwest Bay of Bengal and adjoining Odisha as well as Gangetic West Bengal coasts.

The weather bureau forecast heavy to very heavy rainfall is very likely at a few places with extremely heavy rains at isolated places over Chhattisgarh and Odisha.

Most of east India and adjoining central India is likely to witness fairly widespread to widespread rainfall activity with isolated to scattered heavy to very heavy fall from Friday under the influence of the low pressure over the northwest Bay of Bengal and adjoining Odisha and Gangetic West Bengal coasts.

The IMD said it is likely to become more marked during the next 24 hours and move west-northeastwards across Odisha.

Conditions are favourable for further advance of southwest monsoon into more parts of Gujarat, Madhya Pradesh, remaining parts Chhattisgarh and Odisha, entire West Bengal and Jharkhand and parts of Bihar and east Uttar Pradesh and remaining parts of north Bay of Bengal during the next 24 hours, according to the weather bureau.