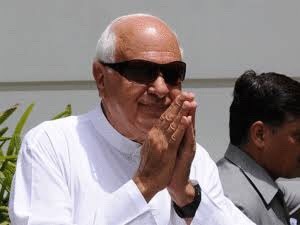 Srinagar: Parliamentarian and senior politician from Kashmir Farooq Abdullah has been placed under house arrest on Friday, Jammu and Kashmir National Conference said.

The party said Abdullah was arrested after he returned from National Conference headquarters Nawai-Subha where he had said that his party will peacefully fight for the rights illegally snatched this day in 2019.

“Dr Farooq Abdullah has been placed under house arrest after returning from Nawai-Subha where he had earlier presided over a meeting and said We will peacefully fight for our RIGHTS that were illegally, unconstitutionally and undemocratically snatched from us on August 5, 2019,” JKNC said in a tweet.

Pertinently, Government of India abrogated article 370 of Indian Constitution on Augudt 5, 2029, and divided the erstwhile state into two union territories- JK and Ladakh.

However, police refuted the news of any politician of Kashmir being put under house arrest today.

The police spokesperson further stated that Mehbooba Mufti visited her party headquarters around noon time and Dr Farooq Abdullah visited Hazratbal shrine and his friend in Shalimar in Afternoon. Media friends are advised to verify news from authorities before circulating.