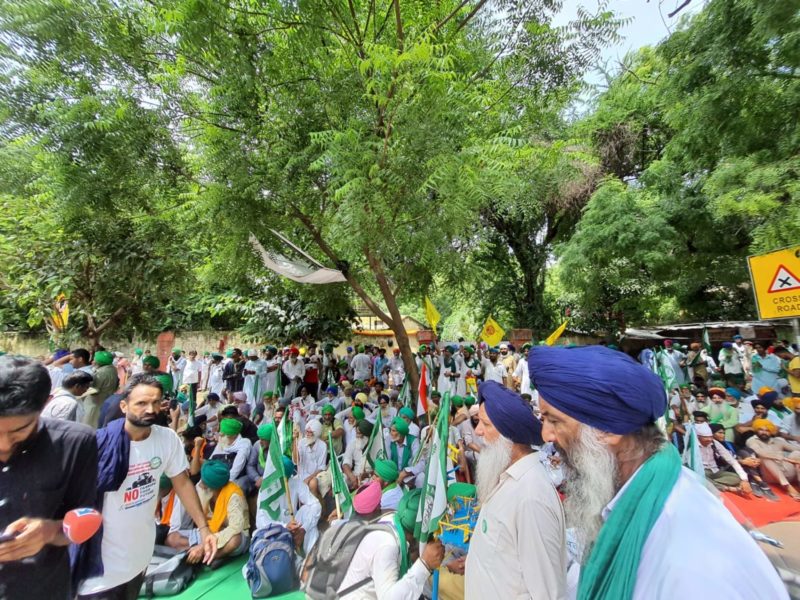 New Delhi: As hundreds of farmers from different states started reaching Delhi to participate in a ‘Mahapanchayat’ called by the Samyukta Kisan Morcha (non-political) at Jantar Mantar on Monday, Delhi Police have deployed its personnel at various borders of Delhi.

As per reports quoting police, all vehicles entering Delhi are being checked and police are on ‘alert mode’. Traffic movement may be affected in many parts of Delhi as the police have put up barricades at border points.

Delhi Traffic Police took to Twitter and issued an advisory for the routes to be avoided on Monday. It wrote, “In view of Sanyukt Kisan Morcha’s Mahapanchayat at Jantar Mantar tomorrow, Delhi Traffic Police requests commuters to plan their journey in advance and avoid the mentioned roads for convenience.”

The Samyukt Kisan Morcha (SKM) and other farmers’ groups are organising the Mahapanchayat to protest against unemployment, following which police have been deployed at Delhi borders.

The Mahapanchayat is also being held to demand justice for kin of victims killed in Lakhimpur Kheri incident last year and the release of jailed farm law protesters, among others.

Section 144 has been imposed and police have heightened security at the three border entry points to Delhi at Ghazipur, Singhu and Tikri, one report suggested. Farmers have begun arriving at Jantar Mantar to stage a protest amid heavy police presence.

On Sunday, ahead of the protest, farmer leader Rakesh Tikait was detained by the Delhi Police at the Ghazipur border while he was trying to enter Delhi to take part in the rally.

“The Delhi Police working at the behest of the government cannot suppress the voice of the farmers. This arrest will bring a new revolution. This struggle will continue till the last breath. Won’t stop, won’t get tired, won’t bow down,” Tikait tweeted in Hindi.

Bharatiya Kisan Union (BKU) leader Rakesh Tikait was detained by the Delhi police at the Ghazipur entry point a day ahead of today’s agitation, various reports say. As more protesters arrived, the Delhi Police detained some farmers at the Ghazipur border to “control the crowd”.

However, DCP (East) told The Indian Express that after “due verification” the protesters were allowed to proceed to their destinations.

The protests will continue despite a failure to obtain the requisite permission from the Delhi Police for continuing with them. “We have made adequate arrangements to ensure that the law and order is maintained and there is no loss of life and property,” Special Commissioner of Police (Law and Order) Dependra Pathak told news agency PTI.

The two major demands of the protesters —the release of jailed protesters and the arrest of GoI Minister Ajay Mishra Teni, whose son Ashish was allegedly involved and is the top accused in the Lakhimpur Kheri violence incident.

The protesters have also demanded legislation on Minimum Support Price (MSP), the revocation of the Electricity Amendment Bill 2022 among many others.

The protests are being led by the SKM, which is an umbrella group of 40 farm organisations.

Barricades have been put around the protest site at the Jantar Mantar. Special Commissioner of Police (Law and Order) Sagar Preet Hooda told news agency PTI, “Personnel usually remain deployed at Jantar Mantar but on Monday, we have deployed additional forces in view of the ‘Mahapanchayat’.”