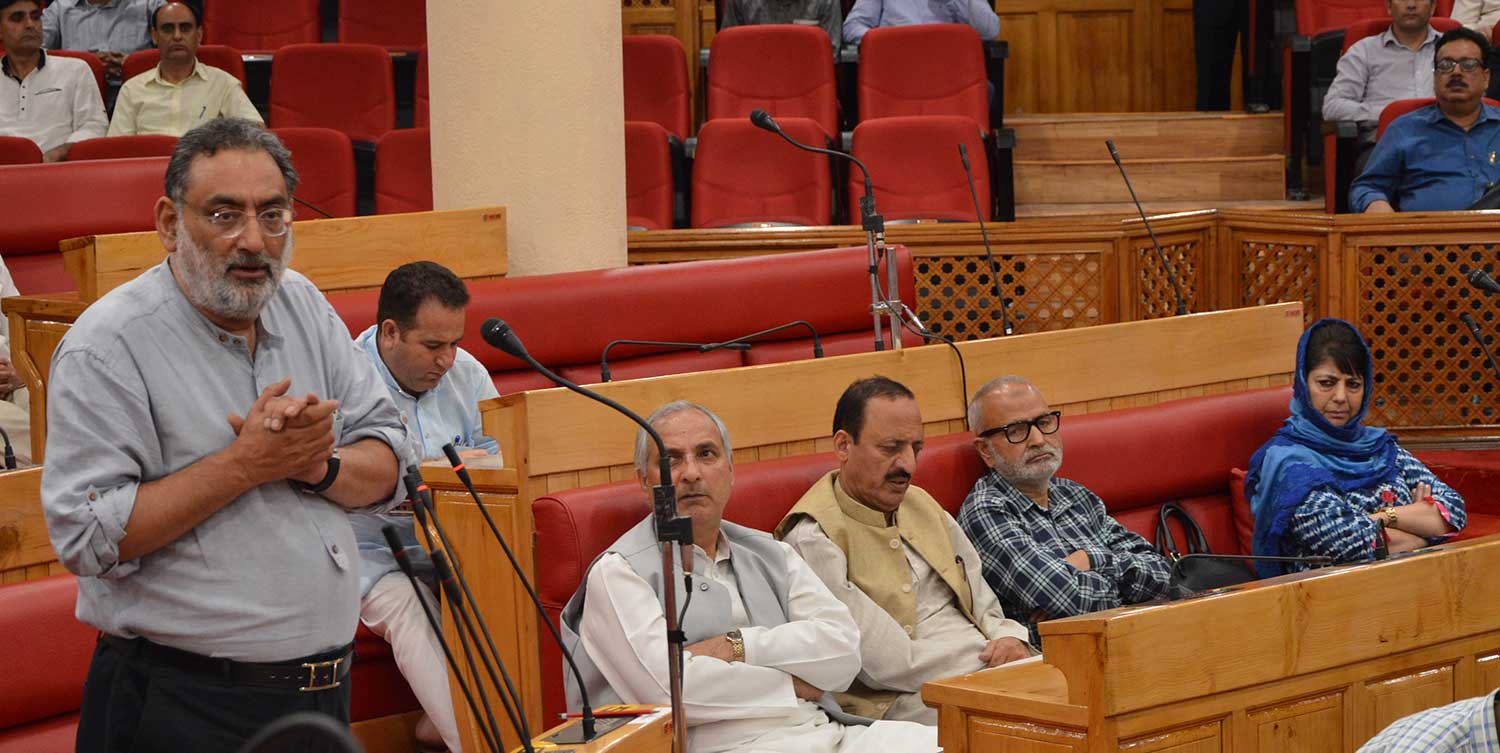 Srinagar: The Goods and Services Tax (GST) bill was passed by the State Legislature (both houses) with a voice vote on Friday after a presidential order was tabled in the house. Finance Minister Haseeb Drabu moved the bill in both the houses with all the ‘necessary safeguards’ which were promised by the state government.

The Bill makes the provision for levy and collection of tax on intra-State supply of goods or services or both by the State of Jammu and Kashmir.

Drabu in a presser, before reading out the safe guards from the presidential order said that this has been the first time that an amendment was discussed in the house.

The new tax regime will be rolled out on Friday at 12:00 am.

“For the first time in 60 years, we have laid out a process of a transparent, institutionalized democratic process wherein a constitutional amendment followed a resolution in the Assembly which was laid on the table of the house. This has happened for the first time,” he said.

He added, “This is the 47th amendment but the first one which has been discussed in the assembly.”

He also added that previous amendments were ‘read’ by legislators in newspapers and history books.

“I will not be wrong in saying that till now all the amendments which were extended were read by the legislators in newspapers. In fact, they read those in history books. So this is a big plus for not only the state but for the country too,” he added.

He further added, “I am deeply thankful to the Prime Minister and the President of India for a presidential order which is actually in line of what was resolved by the legislative assembly of the state.”

The Finance Minister then read out the important clauses which safeguard the special status of the state.

“The Presidential order is in the public domain but I would like to read out some very critical and important points as there was a lot of commotion in the civil society that Article 370 has been abrogated, Section 5 has been compromised and the last nail in the coffin of the Autonomy has been done with.”

He also mentioned that by tabling the Presidential order in the house, the present dispensation has started a new tradition in the democracy of the state.

“The Legislature of the state of Jammu and Kashmir shall have the powers to make laws with respect to goods and services tax levied by the state,” Drabu said while reading from the excerpts of the Presidential order pertaining to the special status and exclusive taxation powers of the state.

Another safeguard Drabu read out of the Presidential order said, “Notwithstanding anything contained in clause 4 to clause 11 for the purpose of any decision impinging on constitutional provisions relating to the state of Jammu and Kashmir, the concurrence of the representative of the state of Jammu and Kashmir in the goods and services tax (GST) council shall be mandatory and the procedure provided under Article 370 shall be followed.”

Drabu pointed out that the government has incorporated all the safeguards promised.

“The Opposition had made a huge issue out of a non-issue by claiming that the fiscal autonomy of J&K will be compromised and the special status of the state under Indian Constitution will be eroded. The Presidential Order has respected the sanctity of the J&K Legislature by safeguarding our Constitutional, Economic and Administrative powers,” he said.

Drabu mentioned that the GST will go through reviews but there is no exit clause.

“Off course we are eligible for a review but if you are looking at an exit clause, there is none. After five years, if you say that it’s not working for me and I am done with it, that is not going to happen. You cannot live in isolation. That is a fact,” he said.

He added, “In a matter of six days, the business at Lakhnpur was reduced by 50 percent. I have been receiving frantic calls. This just happened in a delay of six days. You cannot create a parallel which is not related to the rest of the world.”

While castigating the National Conference, Drabu said he doesn’t understand what they want.

“When you have a track record of complete deceit exemplified by 1975 amendment order which was not seen by anybody, which had to be discovered by somebody what has happened, where barriers were put on amending the constitution of JK,” said Drabu.

He went on to say that the 1986 amendment order virtually removed the residuary powers of the state.

“The President of India issued an order in 1986 saying that Union can legislate on matters of State Legislature. They can’t take a high moral position,” he added.