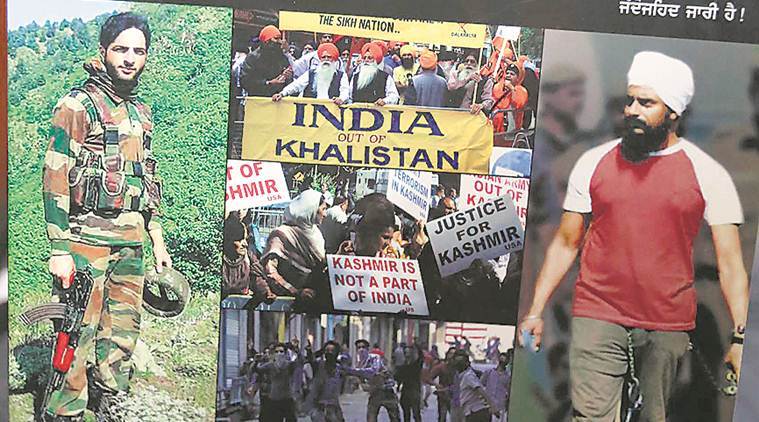 Burhan Wani, whose support in Kashmir brought the place to a standstill in 2016, when news of his killing spread, has resurrected in an unlikely place. Images showing the charming commander are printed on books in the neighbouring Punjab.

Wani has been adopted by Sikh groups, selling magazines with him on the cover describing him as ‘Hero of Freedom of Kashmir’ at the Shaheedi Jor Mela in Fatehgarh Sahib on Monday, the Indian Express reported.

According to the report by Jagdeep Singh Deep, the magazine was being sold in a big stall manned by supporters of SAD (Amritsar), near the Rauza Sharif, amidst other radical material including books, car stickers, badges on Khalistani militants including Jarnail Singh Bhindranwale.

Called ‘Vangaar’ (Challenge), the pro-Khalistan magazine reportedly ran a cover story in its August 2016 issue on Wani describing him as the ‘Hero of Freedom of Kashmir’.

The issue came out a month after he was killed in an encounter with the security forces in July 2016, and was being sold 18 months later at the Jor Mela for Rs 30.

Apart from two articles on Wani, the 42-page issue of the magazine also carries a “special” message on “azadi” from Jagtar Singh Hawara, convicted in the Beant Singh assassination cases and now lodged in Tihar jail; an article on drug use in Punjab, an article on ISIS.

The two articles on Wani have been written by Gajinder Singh of Dal Khalsa, who is believed to be in Pakistan, and the pro-Khalistani writer Baljeet Singh Khalsa.