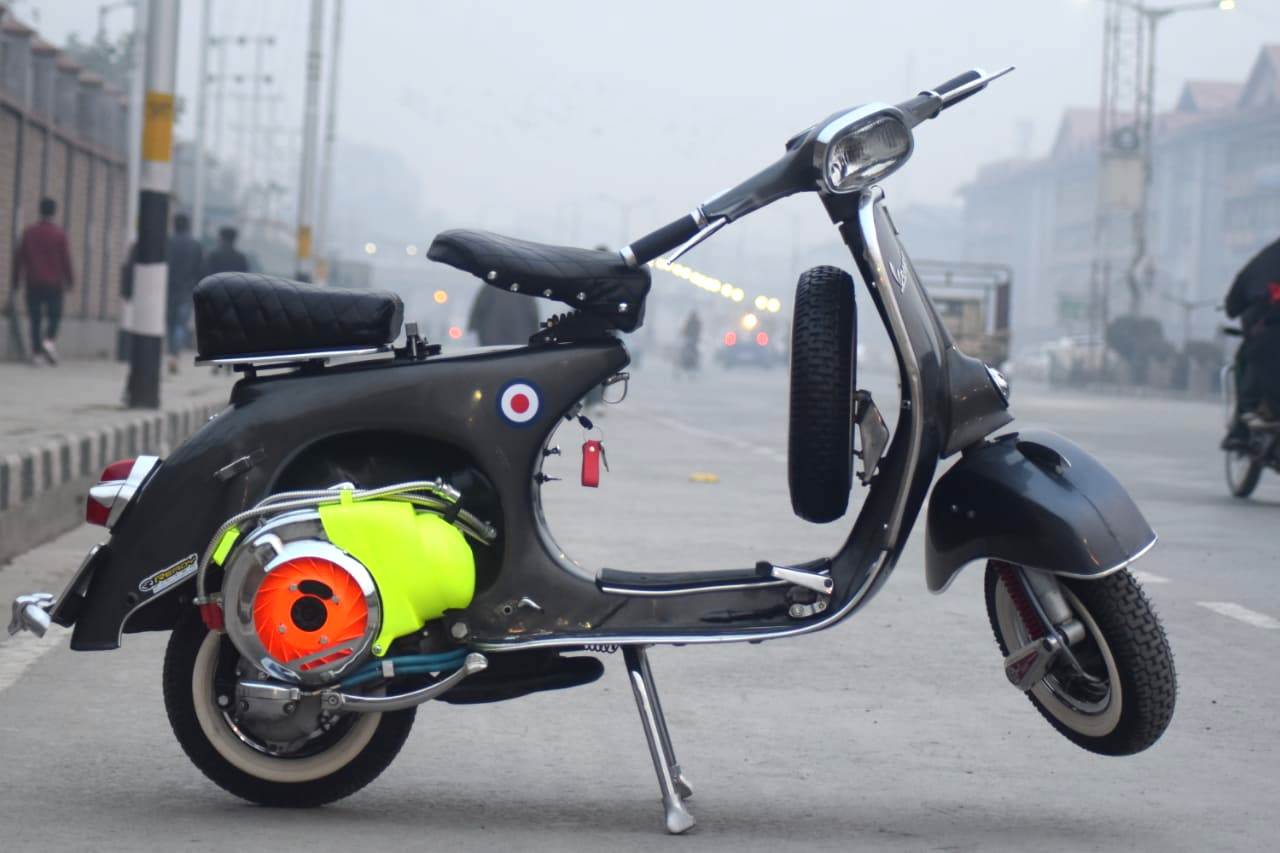 His childhood interest in old-fashioned and depleted things created an oddball image of him. But years later when he turned a junked Vespa scooter into a ‘golden bride’, his antiques not only dropped jaws in awe, but made him the Sun City’s new sensation.

Crowded pedestrian and vehicular footfall makes noontime the most chaotic period in Srinagar’s Maisuma. It essentially takes the defiant neighbourhood’s rebel pulse to bring everything to a grinding halt here.

But these days, the maddening footfall doesn’t need the vintage defiance to go haywire. It just needs the vintage ride — that disappeared from Srinagar’s streets many years ago.

A group of people has gathered opposite Police Station Maisuma, surrounding a two-wheeler that belongs to Mohammad Owais. It’s a Vespa Bajaj scooter bearing the number JKE 140, likely a pre-90s vehicle.

Much of the public wonder has to do with the fact that they don’t make such rides anymore.

From a distance, the 28-year-old owner stands unfazed. He is not new to such sudden swarming.

“It has been a few months only,” says Owais, smiling, as the rush around his two-wheeler ride increases, “since I brought this old vintage Vespa scooter back on the street, in a modified form.” The scooter has become a street spectacle.

The old vehicles might be pieces of trash for many, but for Owais, they are the artistic playfield. “She is a golden bride,” an awed elderly man passes a comment on the shimmering scooter.

Before bringing the vintage scooter back on Srinagar’s streets, Owais had to live up to the taints of being a “weird teenager” who loved to ‘explore scrap’ over studies. His family often found him fiddling with his grandfather’s discarded vehicle, rusting, unattended in their courtyard.

But while others thought of new cars, he would mull over creative means to turn pieces of trash into a things of beauty.

“As an artist,” says Owais, who suspended his studies after his Class 10, after getting a job in the Passport Office, “old and worn-out things always fascinate me. I am also into painting and most of my works have won me awards.”

Rubbing the driver’s seat of his Vespa scooter, Owais says, he doesn’t work at any mechanical or modifying store, but practices his passion at his home in Bemina, Srinagar.

“I start from the face, moving through the front fish, mudguard, white walls and continue adding chrome lining that brinks new life in the classical two-wheeler,” he says. The scooter which Owais modified.

Owais is friends with many mechanics of Maisuma, whose company adds to his experience in the field, making it easier for him to craft different parts of the scooter.

The chrome metal, rather than the black metal, he says, gives a different look and feel to the vintage collection. “That’s why,” he says, “I mostly avoid any black metal modification.”

His passion is duly getting noticed. He nods to a passerby, who compliments his JKE-140 Vespa scooter.

But as his scooter continues to stay a spectacle of sorts, Owais says, he doesn’t merge his personal life based on his antique passion with the professional one. However, it’s his personal life, which is fast becoming his new identity.

He has been approached by many people for modification of their old defunct scooters.

“I feel happy to be a person who might somehow help bring back the classical vintage to life,” he says. “I always take my time, whenever I take up any scooter for modification, to which my customers have to manage.”

It was because of this artistic acumen that his custom-made scooter took everyone by surprise a few months back, at the vintage vehicle exhibition called Kashmir Off-Road. Owais’s ‘Golden Bride’ was declared as a winner in the Modern and Vintage Motorcycles and Scooters Category. “The event brought me more close to my passion and my love for vintage vehicles,” he says.

Presently, as people can be seen photographing old buildings and other things heritage, Owais sees hope in the future of vintage vehicles, if handled with creative treatment.

“Even in hard times, we shouldn’t give up on what we love. We must keep our passion alive,” says Owais, before kick-starting his vintage ride to glide smoothly though the streets of old Srinagar.