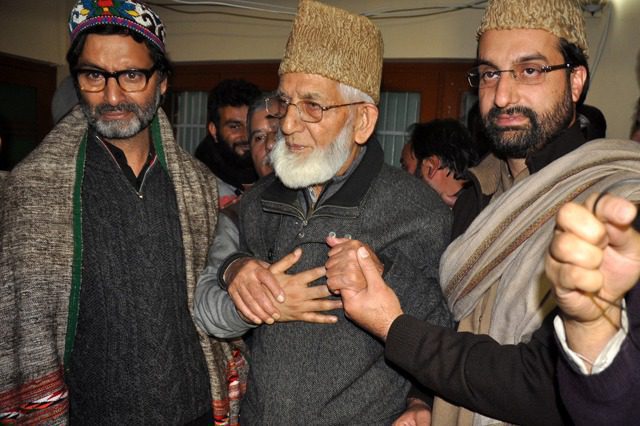 Srinagar: The Joint Resistance Leaders (JRL) while reiterating their call of ULB, Panchayat polls said that  it is a “political gimmick to hoodwink international community”.

Syed Ali Geelani, Mirwaiz Mohammad Umar Farooq and Mohammad Yasin Malik while rejecting any electoral process as a substitute to right to self-determination, made a fervent appeal to the freedom loving people of Kashmir to observe a complete election boycott of the upcoming municipal and local bodies elections in the Jammu and Kashmir.

In a statement, urging the people to rise to the occasion to disprove any Indian writ on the ground in the shape of peoples support, the JRL termed the election drama as a political gimmick to hoodwink the International community that the people of Kashmir enjoy Indian democracy freely.

“The highest per capita military power used in Jammu and Kashmir, in addition to the para-military and state police forces to conduct elections, speaks volumes about their civil liberty and other political and social rights of the people,” the statement said.

The JRL while referring to the election history of the state said that in 1953, when the so-called constituent assembly was created, all the 76 MLA’s were elected unopposed and the people remained aloof from any voting process.

“The contemporary democratic world is not familiar with this kind of democracy? asked the JRL.

However the JRL reiterated its stand that the people of Kashmir are engaged in a movement for right to self determination for which ‘we have a huge investment in the shape of 650000 human lives, billions of worth property and honour, so the participation in any kind of elections is dead impossible.’

The JRL termed the much hyped elections as a bait to lure the pro-Indian politicians acting as agents to change the demography and state subject law and to exploit the economic benefits of the state.

The JRL while paying rich tributes to the Imam Hussain (RA), termed his sacrifices as a symbol of bravery to fight tyranny and subjugation.

“He taught us to differentiate between Right and Wrong and stand by the right, come what may.”

The JRL appealed for maintaining unity and brotherhood at any cost, at the critical juncture of our history when the occupation forces and other elements with sinister designs are hell bent to drive a wedge in the sectarian harmony under the imperial method of Divide and Rule.

The JRL also appealed the learned Ulamas, belonging to Shia and Sunni schools of thought, to shoulder their responsibilities to maintain unity and brotherhood at all levels.