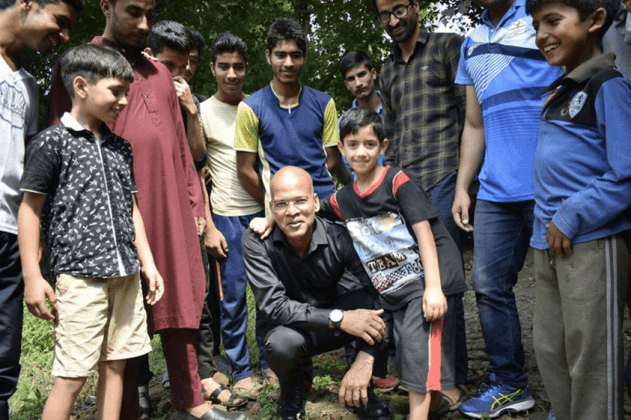 Srinagar: The internet was set ablaze by Kashmiri netizens with praises of Inspector General of Police (IGP) Traffic, Basant Rath after rumors of his transfer circulated around social media on Monday.

Several social media news pages, personal accounts and Whatsapp groups had posted the rumor that Rath, well-famed for his accessibility had been removed from the post.

Few celebrated the news, but many social media users of the Valley expressed sadness over his removal, calling him an ‘honest officer’ of the police force.

Rath is mostly known for his interactions with the younger generation in the Valley, leading many locals expressing overwhelming support.

He is also famous for seizing a police vehicle for plying without a registration number plate at Jammu city’s Bikram Chowk and ordering a Minister’s driver to wear a uniform while driving him to work from home and back.

Many Kashmiris have called him ‘our own Singham’, in reference to popular movie character of the same name played by Ajay Devgan in the movie that garnered 150 crores in the box office.

We are here to work. For people. https://t.co/AonWl7eRFz

Maroof is the guy who gifted me my Instagram account. He created it and ran it for several months. pic.twitter.com/hdn4pOXVaA

With my young friends. pic.twitter.com/NSxBYo2i6z

However, Rath has also been known to get into verbal arguments with government officials, including politicians. A most recent case would be his argument with newly elected Srinagar Mayor, Junaid Azim Mattu over the administrative powers of traffic control, which has currently been increasing despite the secretariat’s Darbar move.

After Mattu had wrote a Twitter post that he had acted on numerous complaints of traffic mess in the city by reviewing traffic plans, Rath had replied that it wasn’t the mayor’s domain.

“Not your domain. Traffic diversion at Jehangir Chowk is a compulsion. The vendors have created a mess on Amira Kadal-HSHS-Maharaja Bazaz-LD Hospital stretch. SMC needs to clear the mess,” Rath wrote as a response.

Upon rumors being mounted of his transfer, Rath clarified later to news website The Kashmir Walla that no such order had been issued.

Kashmir News Service (KNS) reported that a top government official on conditions of anonymity disclosed: “I am not privy to any such move and we have not seen any such proposal being moved from any quarter within the government.”

However, in wake of the rumors, Former Director General of Police Shesh Paul Vaid took to Twitter to express hope that it ‘was just a rumor’.

Social media agog with rumours of transfer of Basant Rath @KangriCarrier IGP Traffic; I hope it isn’t true. He may follow unorthodox ways, but his honesty and dynamism is appreciable & commendable.

Independent Lawmaker Engineer Rashid also expressed support to Rath. Rashid wrote that Rath had been “victimized for being honest, secular and dedicated.”

Those talking Good Governance & Accountability have reportedly removed IGP traffiic Basant Rath.He has been victimised for being honest,secular & dedicated.Who took to streets against him in Jammu have achieved nothing except exposing BJP,s vote bank Politics & narrow thinking

It seems yet a rumor only

Journalist Majid Hyderi criticized the JK government for supposedly removing Rath. “By transferring Basanth Rath for arguing with Neta, JK Govt not only belittled institution of IPS but behaved like cabbage,(Sic),” Hyderi posted on his Facebook, referring to Rath’s recent post on Mattu.

Many social media users expressed their disdain at the supposed decision.

What ever the man @KangriCarrier has did, sure for the first time Kashmiris are concerned and unhappy with the transfer of a top cop.
Sure he has made the line.#basantrath

And he is the only police officer in kashmir who is not seen as a villian rather a hero .

I have never seen even SHOs moving without triple escort and bullet proof vehicles IGP moving without all this that too in a war zone .Hats off Basant Rath you really believe in GOD… We Kashmiris will always love you .@KangriCarrier @spmalik_13 @Junaid_Mattu