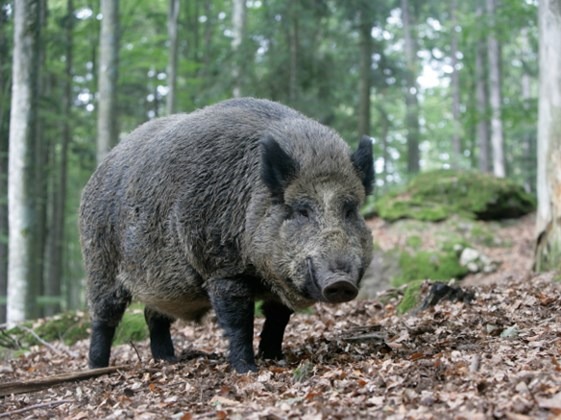 Srinagar: Wild boar or pig which is not a native animal of the Kashmir valley has been sighted in the Dachigam National Park and Lachipora wildlife sanctuary.

These wild boars or Sus Scrofa, have made surprising comeback after nearly three decades in the forests of the Kashmir valley.

Regional Wildlife Warden, Rashid Y. Naqash said, “there is no data available for the number of these wild pigs in Kashmir so far, as people are not aware of its presence and no researcher has followed this topic.”

He said that the Wild Pig was brought to the Valley by erstwhile ruler, Maharaja Gulab Singh, for game hunting.

“Earlier in 1980, after the end of Dogra Raj it was wiped out from Dachigam National park and since then it has never been reported, but recent sightings from the National Park has confirmed its presence,” said Naqash.

In 2010, a dead wild pig was sighted in Lachipora wildlife sanctuary of the Kajinag Range of north Kashmir by a team of researchers when they were surveying for Markhor.

In a research paper, Dr Khurshid writes, “In April 2013, during a survey for Hangul, the Royal Kashmir Stag, a team of researchers sighted the Wild Pig on the main road in the lower Dachigam area.”

ALSO READ: Inside the militarized habitat of Kashmir’s Royal Stag

According to officials, in May 2013 the animal was again sighted in the camera trap in the riverine patch near Rescue Centre of the Dachigam National park.

“Interestingly in October 2014, another pig was sighted at the Kakawpud location of Lachipora Wildlife Sanctuary in north Kashmir,” a research scientist, Dr Riyaz Ahmad said.

“It is believed that the pigs may have made entry through the forests of Pakistan administrated Kashmir as the species before partition were spread throughout the Kashmir forest including the Azad Kashmir forests,” he said.

Moreover he said that after the partition the wild pigs survived in the forests of Pakistan administrated Kashmir.

Ahmad said that the species of wild pig is a herbivore and invasive animal and thus no step was taken to conserve it.

He said, “The animal is light grey shaded, with short legs and is a prey to the native leopard.”

People from Handwara region have reportedly complained that wild pigs are seen in their agricultural field destroying their crops, said Ahmad.

Dr Khurshid further writes in his research paper, “after the end of Dogra Empire, the people of Kashmir expressed concern over the presence of the wild pig in the valley and due to mass agitations by the locals, steps were taken to eradicate the alien species from the Kashmir forests.”

The species was considered locally extinct even from the Dachigam National Park, and according to the State Wildlife Department, was not sighted from the park and its adjoining areas since 1984. The recent sighting of the Wild Pig in Dachigam after a gap of about 30 years however proves that it still survives in Dachigam, reads the paper.

The wildlife department is still clueless about their number and has done no survey to trace these wild pigs after their reappearance in the valley.