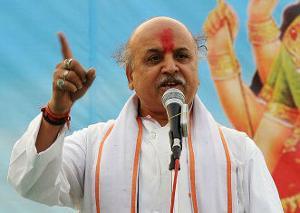 Former VHP leader Praveen Togadia has said the IAF air strikes in Pakistan’s Balakot has not yielded desired results as attacks have not stopped in Jammu and Kashmir.

Togadia added that ‘terrorist attacks have not stopped due to the “weak” leadership of Prime Minister of India Narendra Modi.’

Without naming the then Prime Minister of India Indira Gandhi, the Hindutva leader praised the country’s leadership during the 1971 Indo-Pak war, which led to the creation of Bangladesh.

“My question is, have terror attacks stopped after the air strike in Balakot? After the air strike, two majors and 10 jawans had been killed (in separate incidents in J&K). There was a grenade attack in Jammu yesterday,” he said.

“If the surgery has been done, what is its importance (if the disease has not been cured)? Surgery (for me) means to get the patient rid of cancer,” Togadia, a qualified cancer surgeon said.

To a question, Togadia said what is the use of air strikes if soldiers are still dying?

“We split Pakistan in 1971, but at that time the leadership was with somebody else,” said the right wing leader.

Apparently referring to Modi, who made a surprise visit to Pakistan in 2015-end, he said, “The leadership which without invitation goes to eat the cake of (former) Prime Minister (Nawaz Sharif) is weak.”

The tensions between India and Pakistan countries have escalated following the Pulwama attack on a CRPF convoy in Jammu and Kashmir, which killed 49 CRPF personnel and which was claimed by militant outfit Jaish-e-Mohammad.