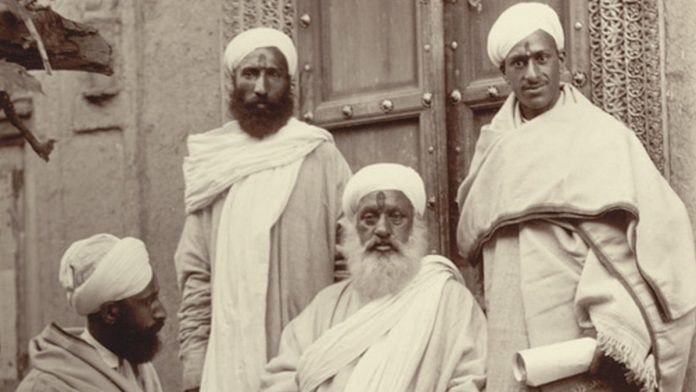 The Hindu Rashtra project of Brahman supremacy was established and successfully executed in Kashmir, long before the idea hit popular imagination in India, and became mainstream discourse in Indian politics.

For a long time, even after the mass conversions to Islam from Buddhism, and the establishment of a Sultanate in Kashmir, the Kashmiri Brahmans continued to be in positions of privilege and authority.

Except during the brief rule of Sikander, when a converted Brahman, Suhabatta (Malik Aasif) was at the helm of affairs and settled his personal scores, the Brahmans grew to prominence, expanding land holdings and power.

The reason behind it was the Bhatta (Kashmiri Brahman/Pandit) penchant for academics and partly the subtle art of using diplomacy, blandishing the ruling class.

It was during the rule of of Zainul Abideen that those Pandits who were exiled previously during Suhabatta’s (Malik Aasif’s) time, were invited back.

Zainul Abideen abolished the taxes (Jiziya), extended liberal patronage to Sanskrit language and literature, and had Mahabharata translated into Persian by an order.

Some of the Pandits like Shri Bhatta, would be in constant attendance of the king. The administration of the country was in Brahman hands, who were in-charge of land settlements and agriculture and would use the rapport to benefit only other Brahmans.

Gopala Koul, Ganesha Koul and Madho Koul, as the chiefs of land settlements and agriculture, appointed men of their own creed as their subordinates like Patwaris. The court of Zainul Abideen was florid with the presence of Pandits and many were assigned with strictly confidential diplomatic missions.

The influence and power of Bhattas in Zainul Abideen’s court was such that he forbade the killing of fish in certain tanks and meat eating on certain days auspicious to the minority community.

Under Zainul Abideen Brahmans would follow their personal religious law according to the Dharmashastras. He also reintroduced the grant of stipends to the learned Brahmans.

During the Chak rule, Brahmans continued receiving land grants and serving the administration. There were Mathas built and villages endowed in their favour.

The Chak kings participated in Hindu festivals and invited Brahmans to their court. All of this proximity with the ruling class came at the cost of sustenance of the majority Muslim peasantry, which was marred by exploitations at the hands of some larcenous Brahmans. The Pandits as per records were close to 1.5% of the population, but disproportionately owned land and power.

The occupation of Kashmir by Mughals, which is often considered as the ‘beginning of the end of Independence’ of Mulk-e-Kashmir started in 16th century and was resisted by Kashmiris who were setback by the occupation.

Akbar tried his best to subdue the people but could not earn their love and goodwill. He then succeeded in enlisting the support of Brahmans who received his special attention and patronage.

These Brahmans identified themselves with the occupier when the Mughals annexed Kashmir.

After one of his visits to Kashmir, Akbar left along with a number of Pandits and some powerful among them were given better positions, like Sada Koul, who was bestowed the highest title such as itmad–ul–saltanat (trust of the empire), mushir–ul–mulk (advisor of the state) and gam khar (sympathiser).

Akbar distributed rent free lands to the Bhattas (Kashmiri Brahmans/Pandits) and bestowed power and control upon them.

The Muslims on the other hand were forced to live a life of complete political disempowerment as a matter of state policy.

Their properties were usurped and they were ousted from channels of state administration. Akbar forbade the entry of the Kashmiri Musalmans into army so as to crush their martial spirit, while Brahmans continued to hold critical positions in the defence of the borders.

Even during the time of Aurangzeb Brahmans enjoyed a very high status in the country. The influence of Pandits on the Mughal rulers was so immense that on their recommendation; Abu Barkat Khan was appointed as the Subedar of Kashmir five times.

The service linkages with the Mughals even changed the surnames of Brahman families. The Gurtoos acquired the surname Bahadur as a result of service in imperial force, some Kouls after being appointed in treasury became Bakshis, others became Nigari Kouls for their association with Naqqar Khana.

The powerful Muslims families such as Chaks, Shah Mirs, Rainas, Maliks, Bhats etc were brought down from the high pedestal.

Afghan rule in Kashmir is considered as that of repression. There were brutalities galore, innocents were burnt and drowned: children, women and elderly, all alike. Afghans imposed horrible taxation policies leaving people impoverished. Many Pandit historians consider the period repressive for Brahmans.

But mordern hisorians note that people like Pandit Nand Ram Tiku became the prime minister of Kabul and his name would appear on coins and official documents.

Some names became talk of every Kashmiri household as a part of the brutal Afghan regime. These included the likes of Mahanand Pandit Dhar who was the advisor to governor Nooruddin Khan and later became the prime minister for Sukh Jeevan, an Afghan Hindu ruler.

On the suggestion of Dhar, the Governor banned Azaan and issued ban on cow slaughter, the orders which would be reinforced during the Sikh regime. Gow Hatya became a crime, and Hatya Haanz became the Kashmiri equivalent of a blasphemy law, which would invite punishment of being skinned alive.

Dila Ram Quli, a Kashmiri Pandit advisor to the most dreaded Governor Azad Khan assisted him in his merciless policies against the Muslim peasantry of state. He is also recorded as abetting the Shia-Sunni discord in 1786. Anyone trying to rebel against the Afghan rule was labelled as a traitor.

The influence of Pandit adivors on the Ahmad Shah Abdali was so immense that many governors, like Nooruddin Khan and Mohammad Khan were removed.

Even when Kashmir was ruled by Muslims, Kashmiri Pandits formed the administrative and political apotheosis. They continued to grow in strength and often became instrumental to perpetuation of anti-people policies of the country.