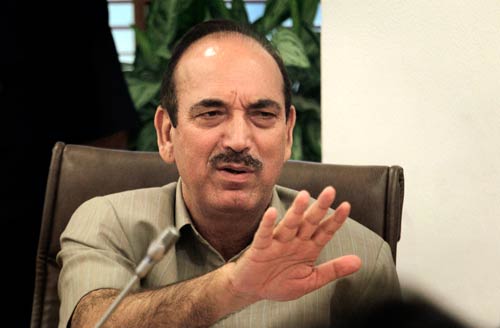 At least 20 senior Congress leaders considered close to former Leader of the Opposition in the Rajya Sabha Ghulam Nabi Azad, have resigned from their respective party positions.

According to a report by Indian Express, all those who have resigned are demanding change in party leadership in the Union Territory.

G N Monga and Vikar Rasool, when contacted, confirmed that they have written a letter to party president seeking change in the leadership in the UT. Without naming Pradesh Congress Committee president G A Mir, Vikar Rasool said, “We had been told that he is being appointed for a period of three years, but it has been seven years now. However, we have told the high command that we will not hold any party position if there is no change in the party leadership in J&K,” adding that they had written the letter some 20 days ago.

Dr Manohar Lal said that it was party’s internal matter and that he will speak over the issue after his meeting in Kathua on Thursday.

In the resignation letter addressed to AICC president Sonia Gandhi and copied to Rahul Gandhi, Rajni Patil, in-charge secretary for J&K, these leaders have alleged that under the presidentship of Mir, Congress is heading towards a disastrous situation and till today more than 200 senior Congress leaders, including former ministers, MLAs, MLCs, PCC office bearers, district presidents and AICC Members have resigned from the Congress and joined other parties, while some others have chosen to remain in the silent mode.

These Azad loyalists have further alleged that “some un-scrupulous sycophants have captured and hijacked the functioning of PCC. Party posts were distributed without consultation of senior leaders and sitting MLAs / MLCs of the Districts.”