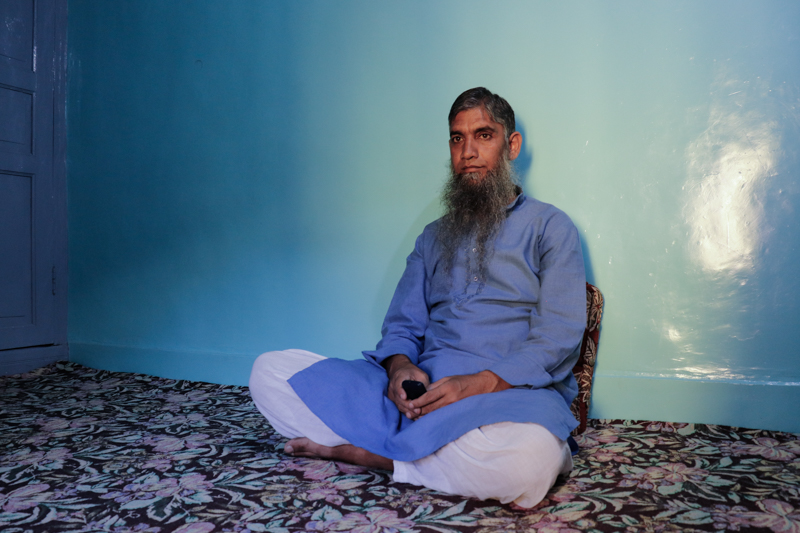 Shakeel at his home in Fateh Kadal on September 7, 2020, a month after he was released from his year long imprisonment. He recalls it as harshest time he ever spent in jail. [FPK Photo/Zainab]
Share
Tweet
Share
Share
Email
Comments

As Kashmir witnessed another ‘blasphemy’, this time, created by a New Delhi-based publisher, the act reminded many of Kashmir’s sentimental response and the rise of a ‘rage boy’ who became the iconic face for an ‘angry muslim man’ world over.

His animated expressions captured during a Srinagar demonstration in mid-2000s instantly made Shakeel a “rage boy” for western media. It was the time when George Bush was making mess of Islamic countries in the name of “War on Terror”. In the backdrop of the growing rage in the Muslim world against the American hegemony, this angry Musalman from Kashmir, it’s believed, became the best bait for the western media to use and represent the 1.9 billion strong community as a “monster of madness”.

But when Shakeel became “Islamic rage boy” for expressing anger over the blasphemous act, it forever shadowed his personality. The downtowner fought hard the tag—even suing his “media tormentors”—but the name stayed. And it went on to change his life beyond belief.

Years before his ‘rage’ identity, Shakeel was growing up as a boy next-door in the Old Srinagar. He couldn’t stay immune to his hometown’s shifting mood back in tumultuous eighties.

(O’ Muslims! This is outrageous!
Our Prophet’s name has appear on booze!)

He was in 7th standard when he raised his first slogan. He pitched that sentimental cry in an anti-blasphemy rally in Srinagar. This was one of the very first protests that Shakeel had participated in. What lay ahead of him was a long political struggle and years of imprisonment. A print out of a morphed TIME cover that now rests in between the pages of Shakeel’s personal archive. [FPK Photo/Zainab]

The first time I met Shakeel was a month after his release from Uttar Pradesh’s Naini Jail.

Located in the old city’s Fateh kadal, Shakeel’s home was being repainted on the day of our mulakaat. The smell of fresh paint hung heavy in the air as Shakeel guided me to the guest room. He told me to excuse the hustle in the house. “I’m getting married in a few weeks and we’re making preparations for it,” he revealed with a wry smile.

Shakeel’s nephew, Zaid, had clenched the hem of his uncle’s kameez in his fist and accompanied us into the guest room. The boy seemed reluctant to part from his uncle, but Shakeel told him to wait downstairs. He knew that to recollect his own history, the many chapters of which were hidden in layers of grief were too grim to be narrated in the presence of a ten-year-old. 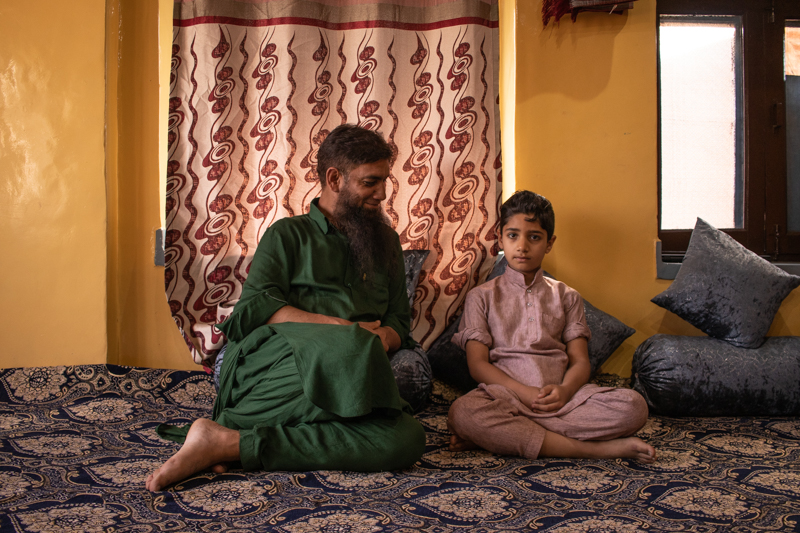 Shakeel poses for a photograph at his home with his nephew, Zaid on June 2, 2021. His two nephews love spending time with their uncle, who has intermittently spent 24 years of his life in prisons. [FPK Photo/Zainab]

Shakeel, now 40 and a newly-wed, has intermittently spent 24 years and 4 months of his life languishing in different jails in and outside Kashmir, the most recent being a 13-month solitary-confinement in 2019 when he was detained just five days before his marriage.

His arrest came in the aftermath of abrogation of Article 370 which granted special rights to the natives of the erstwhile state of Jammu and Kashmir. That summer, the administration arrested many Kashmiris under the controversial Public Safety Act (PSA).

“With a view to prevent commission of offences involving breach of peace and activities prejudicial to the security of the state and maintenance of the public order, 5,161 preventive arrests, including stone pelters, miscreants, OGWs (over ground workers), separatists and political workers, were made since August 4, 2019, in Kashmir Valley,” Minister of State for Home G Kishan Reddy had revealed in a statement he gave in Rajya Sabha, three months after these mass arrests were made.

Shakeel spent the night in a local police station and the same morning, he was shifted to Srinagar’s Central Jail where a police officer told him there were orders to detain him under PSA.

That day, Shakeel had not anticipated that the shortest PSA detention order would yield the harshest jail time for him.

From Central Jail, with his hands cuffed, Shakeel was shifted to Uttar Pradesh via airplane where he spent the following 13 months in Naini Jail.

“They did not blindfold us. I could see that my fellow inmates were 70-80 year old men,” he recalled.

“The jailors told me that they had special orders to not let me see the light of the day. My fellow inmates were allowed to move out of barracks for a walk or to help with chores, but I was made to spend each day in my 10*10 cell,” Shakeel recalled. Shakeel going throw his personal news archive that he has maintained over the course of many years. [FPK Photo/Zainab]

But years before becoming a jail-bird, Shakeel had a first faceoff with the state in 1986, when his home was raided. His sister was thrown down the flight of stairs, he recounted. Six years later, in an explosive year of strife, his bed-ridden sibling, named Sharifa, lost the battle with life. She was barely 18.

A few years after his sister’s death, his elder brother, Hilal, suffered injuries in another military raid. “The injury had rendered him with life-long ailments,” Shakeel recalled. “He succumbed to his ill health in June 2020.”

At the time of his brother’s death, Shakeel was imprisoned miles away from home in UP’s Naini Jail.

“It was the most painful day in my life. I regret not seeing him for one last time,” Shakeel told me with moist eyes.

Shakeel feels that he faced atrocities for his activism. The state, he said, came after his family. “They booked my brothers and nephews under false charges just because of my activism,” he narrated. “But every sacrifice made me firm. My only aim ever was to protest against injustice and wrongdoings.” In a family of six brothers, two sisters, and his parents, Shakeel was the only member who actively took part in protests and demonstrations and had a history of being in the ranks. Having come from a business background family, travelling to far off places for protests was not heavy on his pocket.

In the early 2000s, Shakeel became the poster boy of every protest that was being organised in the old city.

Over a period of time, many of the family’s assets were spent in bailing out Shakeel and his brothers from different jails, and to hire lawyers who could look after the pending cases that the police had lodged against him. A spread from Shakeel’s personal archive where he can be seen detained by the police during a protest. [FPK Photo/Zainab]

Shakeel has 276 FIRs registered against him.

“I have to go to Court almost every day. I have spent most days of my life in prison and in courtrooms,” Shakeel said laughing.

“I am only 40 years old, but I look like a 60 year old. The jail water has turned my beard salt and pepper,” Shakeel said, gathering his uneven beard in his fist.

“See how bad it looks! The poor thing was repeatedly pulled out.” 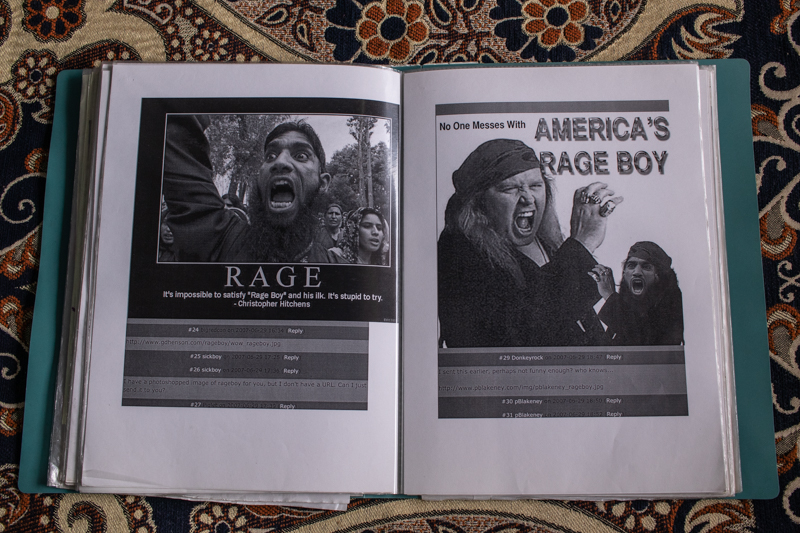 A spread from Shakeel’spersonal archive- printouts of the memes that the west had made on him. [FPK Photo/Zainab]

However, his jail ordeal didn’t stop him to protest against the sacrilegious acts.

From protesting over the blasphemous comments of Pope Benedict XVI to protesting the human atrocities committed in Gaza, Afghanistan, and in his homeland Kashmir, Shakeel would be seen standing tall, leading a mass of protesters, and sometimes a very small gathering, demanding an end to Muslim hate and oppression.

His presence in these protests soon became noticeable. The passion in his eyes had caught the attention of one and all. He was intensively being photographed by the news photographers in Kashmir who in their cameras captured his raw emotions reflecting the rage that the then young Shakeel felt over the blasphemous act. 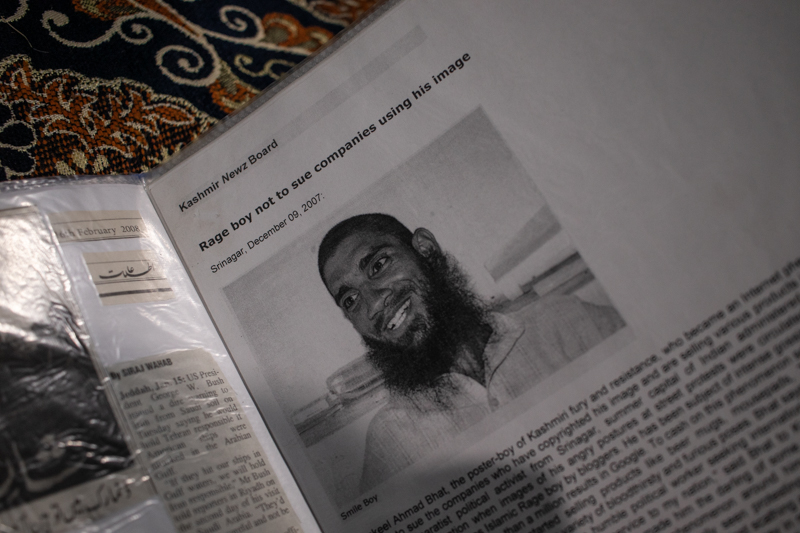 His photos were being printed on t-shirts, mugs, and phone cases. He had become a political meme figure in Australia. Nobody knew the name of the bearded man, shouting a slogan with his fist clenched, and that is when Shakeel’s identity got reduced to “Islamic rage boy.”

“Rage Boy certainly looks like a threat,” a blog on Dailymail UK read. Shakeel displays a photograph taken on the day of his Nikkah ceremony. [FPK Photo/Zainab]

But even after facing all these troubles, Shakeel’s resolve is unfettered. He recalls his childhood when he would often put his father’s skull cap on his head and say, “aadhi roti khayenge, sarr nahi jukayenge.”

“I believe I am still that young boy at heart, with same belief,” he said.

A normal day in his life is a visit to court, to the family graveyard and to some Dargahs in search of solace. Shakeel is attached to his nephews and they too love spending time with him. Shakeel makes a prayer at the shrine of Mukhdoom Sahib, located in Srinagar. A normal day in his life is a visit to court, to the family graveyard and to some Dargahs in search of solace. [FPK Photo/Zainab]

But the protracted jail life has made him quite perceptive about things. He understands and values the emotions of his family much better today.

Every time his family members entered the room where we were talking, Shakeel swallowed his words, as if trying to protect his family from the recollection of trauma that he and his family have endured all their lives.