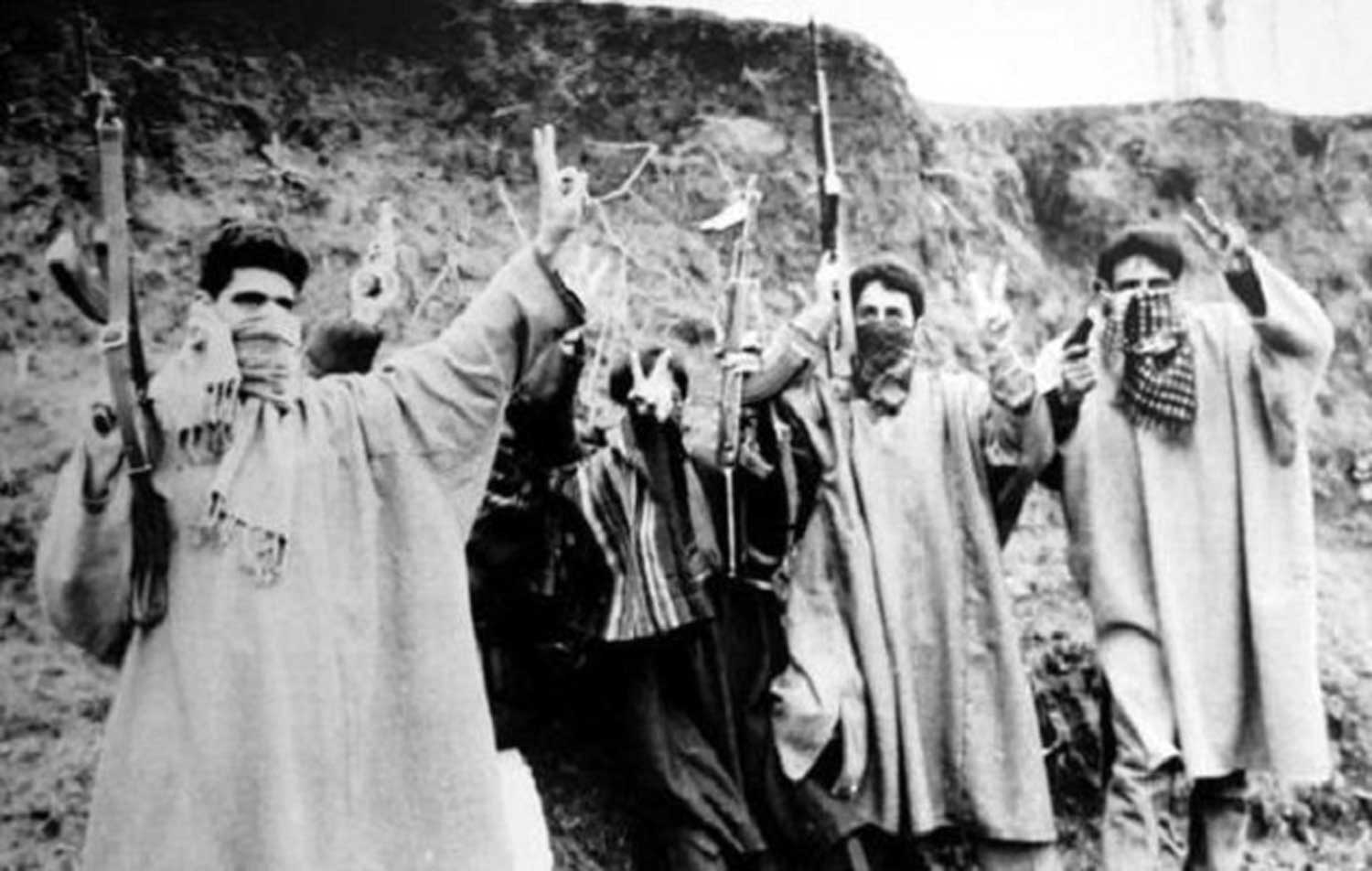 Moscow this past September unveiled the statue of the AK-47 creator Mikhail Kalashnikov to honour the war veteran who gave the world its most potent firearm. Thousand miles across the towering peaks, the statue invigorated memories of the rebellion and the romanticism that the Kalashnikov fuelled in the mountain-locked Valley.

At about the same time when Delhi sent soldier-loaded Dakotas hovering over the Kashmir skies to counter the marching Afridis, a former conscript of the Red Army and a tank mechanic gave the world a highly reliable and sturdy firearm in the form of AK-47. In the history of warfare, the overlapping of the twin explosive events in the fall of 1947 at two faraway lands went on to shape the war consortium in the post-colonial world.

Seventy years later, Kashmir’s Kremlin affair is on, albeit through smoking guns. For the arsenal-wanting Kashmir insurgency, the snatched trophy of AK-47 in a literal street tug of war remains a ticket to insurgent ranks. Sudden disappearance and subsequent appearance of boys with Kalashnikov on social media today heralds the coming of an insurgent. This only makes the Lt Gen Mikhail T. Kalashnikov’s AK-47 a weapon of choice amid the growing chants: “There’s only one solution…” To celebrate that son of a gun—born in a Russian peasant family and died at 94 on Dec 23, 2013—the Vladimir Putin regime last September unveiled his towering bronze statue in the middle of one of central Moscow’s busiest thoroughfares. The military ceremony marked the 70th year of the AK (Avtomat Kalashnikova)-47, becoming the standard issue rifle of the Soviet army, in 1947—hence, the abbreviation AK-47. In the statue, the designer can be seen cradling the celebrated firearm—hailed as a cultural brand of Russia—like a violin.

Kalashnikov became no different brand in Kashmir where it made tardy inroads at a time when Stalingrad keepers were being dismissed as the “occupier’s ally” by Srinagar watchers.

At the peak of the Cold War, when the Soviet Union would send shipments of AK-47s to various allied nations, the two Soviet ministers Nikita Khrushchev and Nikolai Bulganin travelled to Srinagar. During that fag-end of 1955, the duo proclaimed their country’s support for Delhi in a public rally: “Moscow is just across the border and if there is any trouble in Kashmir, Delhi should just give a shout.”

For a commoner in Kashmir familiar with the unfolding polity on ground, Russia was now a nemesis beyond the novelist facade created for that commune of communists by the literary giants like Leo Tolstoy and Fyodor Dostoyevsky. Later as Russia exercised its veto in the UN Security Council to block Anglo-American moves on Kashmir in the 1950s, Moscow’s Delhi tilt became obvious. Years later, when the first Russian President Boris Yeltsin visited India in the tumultuous 1993, he unequivocally supported India on Kashmir. The pat on the back of PV Narasimha Rao’s government came at a time when it was drawing global condemnation over its lethal Kashmir campaign through Catch and Kill Ops.

But before Yeltsin’s Delhi visit, his countryman Kalashnikov’s weapon had already become the raging spark behind the war of attrition in Kashmir. Some of the top Kashmiri insurgents—schooled in war-rugged terrains of Afghanistan during the Afghan-Soviet War—had already trained the Soviet weapon against the Soviet army itself. Back home then, the coming of Kalashnikov only evoked passions beyond comprehension: Sarhad paar jaayenge… Kalashnikov laayen’ge (We’ll march down the frontiers to fetch Kalashnikov).

‘Damn! He pissed in his pants’

Inside sits the militant recruiter Ahad Waza along with Ashfaq Majeed and Manzoor Ul Hassan. They are ferrying sacks loaded with firearms from Kupwara to Srinagar. The cab driver doesn’t even have a remotest idea about the war shipment he is ferrying. He has been told that some ‘desperate for home’ traders need to reach Srinagar with marble sacks. The driver hardly has a hunch of how these men and their tribe are about to change Kashmir. Ashfaq Majeed Wani addressing a presser along with his comrades during 1990s.

Few days back on June 24, 1988, the arms consignment was dumped into jungles when the fourth group—comprised of Ashfaq Majeed Wani, Manzoor Ul Islam and Mohammad Yasin Malik—returned from Muzaffarabad after arms training.

It was later retrieved by Ghulam Nabi Bhat, Maqbool Bhat’s brother and Waza’s partner in militant recruitment from North Kashmir.

The gun—AK-47—is yet to surface in the Valley and these men are exercising caution. Bhat takes a lorry full of ammunitions to Waza’s home and dumps it in a local graveyard.

Now, Waza along with Ashfaq and Manzoor is taking the war consignment to Srinagar, where coming events have already cast their shadows.

Everything seems hunky-dory until a nozzle of AK-47 pops out of a sack. The very sight turns the driver pale and edgy. ‘Damn! He pissed in his pants,’ Waza blurts out, after seeing the driver shaking, pleading for his life. The young Waza—unlike his present freewheeling and waning militant image—is curt ruthless. A disciplinarian for the sake of the D-Day in Kashmir, which is still days away.

In a bid to manage the situation, Waza turns towards Ashfaq, ‘I guess, we need to kill this sissy right now!’ The driver eschews his fear and drops the secretive insurgents at Barbarshah. Dusk has long descended over the City when they take out the war load.

What happens after that is quite a plot…

Trehgam’s Waza returns to his native place in the same Taxi and by the next morning, he is climbing the peaks and woods to reach Azad Kashmir for arms training.

…No longer did that ride from Kupwara take a U-turn at Barbarshah, Ashfaq surfaces in Downtown’s Malaratta along with four of his comrades. They have come calling to their darling anti-India dissenter—about whom the legend goes: he took out bolts from Pakistani tank in presence of Indian Army at BB Cantonment during daylight.

The name is Noor M Kathju. As a founding member of the Al Magbool (the party that took birth behind the bushes of Kashmir’s largest cemetery Malkhah in run-up to Bhat’s hanging in Tihar in 1984), this coppersmith is giving tough time to cops and forces during street demos.

‘Take care of these sacks for a while,’ Ashfaq tells Kathju. ‘I know, you must have understood, what could be inside them, no?’

Among the firearms, Kathju is drawn to AK-47. It’s the beginning of armed uprising. Boys are returning from arms training, albeit quietly. Later that day, Javed Shawl, the man who has been subjected to enforced disappearance reprimands Kathju: ‘It might land you in jail.’

Days later, Kathju is hanging by feet inside a prison cell. Before his breaking point can come, his mother takes the explosive sacks to the old Zaina Kadal and flushes them down the Jhelum. No sooner did those war weapons make a splashing sound on Jhelum waters, the mother sighs in relief.

In Kashmir’s protracted war, many say, Jhelum’s riverbed got loaded with huge cache of AKs—just like its surface got crammed with floating bodies. Imagine, Kathju now wonders, the count of those AK-47s in Jhelum!

Ashfaq bumps into the Operation Balakot commander Azam Inqilabi soon after his return from Muzaffarabad at Ghanta Ghar, Lal Chowk. Blasts are about to rattle Srinagar.

‘We just returned with huge cache of Kalashnikov and other firearms,’ Ashfaq tells Inqilabi amid deceptive din of normalcy pervading in Srinagar’s trade heartland.

‘We’re about to do our first strike…’

Bang! And, the tribe grows

Days after the insurgents uncovered AK-47 at Bohri Kadal for the first time, hosts of Kalashinikovers—the hippie cult of former cricketers, wanderers, engineers, scholars, traders, etc—start roaming on the streets of Srinagar, Baramulla, Islamabad and many other towns. The gun rattle mingles with Azaadi chants. The armed uprising much to Delhi’s chagrin has grown full-blown. Some militant groups have made specific targets out of bunkers and pickets with AK-47 assault rifles. In urban centres, the militant outfit believing in Sovereign Kashmir is taking the lead. But as the JKLF’s last gun falls silent by 1994, the pro-Pakistan Hizb dominates the scene. In between, AKs were trained to each other in group clashes. By mid-90s, the Kalashnikov turns a terror symbol in the hands of new militia of hired guns called the Ikhwan.

It’s March 1996 and the government has learnt that many war-weary militants surrender briefly, meet their family and return to their ranks. Army is worried over this trend, but not as much as over the gun trade. For every surrendered Kalashnikov, they offer Rs 5,000—when the same fetches Rs 30,000 in the market. Not many AK-47s are now coming up, for the usual playing to the gallery games in Kashmir.

Sniffing the gun trade, the Hizb is now repeatedly asking their surrendered comrades to cough up Rs 1 lakh for the Kalashnikov that they surrendered. AK-47 has apparently created crisis for the both the camps.

Mindful of the threat looming large over these defunct guns, Lt-General (retd) DD Saklani, adviser (home) to the Governor, has promised them licences for 12-bore guns. Even after these surrendered insurgents offered to pay from their own pockets to avail the gun, they have been left in the lurch. Delhi is at it, again—making farce of vows—that too, after assuring these surrendered militants a ‘dignified and secure reintegration’ with the society.

Years ago when the insurgents would flaunt the firearm with beret, fatigue and insignia, these troopers had understood the pulse of the romanticism attached with the weapon. Many of them are now aspiring to emulate that faded aura.

It’s 1999 and INSAS weapon has touched its nadir. These Indian soldiers are asking for Russian replacements to wage the 1999 Kargil War. Unlike their unreliable traditional weapon, AK-47s have been speedily sent to the frontline. By the end of Kargil adventure, many commanders are hailing Kalashnikovs as life-savers and face-savers for Indian forces at Kargil.

AKs have now changed Indian troops. Unlike bullets fired from other rifles, AK’s larger 7.62 mm bullet causes more disruption of tissues and blood loss. With its trouble-free operation, weather-proof features and low maintenance qualities, AK-47 is too good to knock down anyone that qualifies for an insurgent in Kashmir.

Swinging between Stone and AK-47

By 2007, militancy had reached to its lowest ebb in Kashmir. A year later, the young generation unlike their predecessors is picking up stone than AK-47 as their weapon of choice. But the ‘security’ hounding by 2010 ending has shifted the momentum, again, sending the dissenters back to jungles with AK-47 in hand. For the next six years, the boy who recreated romance in AK-47 is waging the psychological warfare. He has his own rules for his own militant games.

Somewhere in Tral jungles in 2015, Burhan Wani is turning down the Lashkar-e-Toiba’s offer of unconditional support to Hizb. Iconic image of Burhan and his comrades.

‘We can run this on our own,’ pat comes the reply. Days later, with weapons long stopped coming from the other side, the insurgent aspirants begin snatching service rifles from paramilitary and police personnel across Kashmir. The act has become an unwritten rule to qualify for the new-age militant ranks.

Many see the trend as an act of reclaiming the bygone Kalashnikovs that forces seized from their predecessors. In all this, the AK-47 has resurrected the rebellion. Sometimes a police or army deserter hogs headlines with it—and, the other time, the boy insurgents make news by using it as stump in woods for playing cricket. All this makes the insurgents’ love for AK-47 apparent.

Perhaps he got his answer after a young man held up a poster during his statue unveiling ceremony last month, reading: Designer of weapons = designer of death.

But in Kashmir, where graveyards got fattened with the fallen insurgents—who would proudly flaunt their AK-47s in the war of attrition once—the weapon is still fuelling rebellion as well as imaginations.