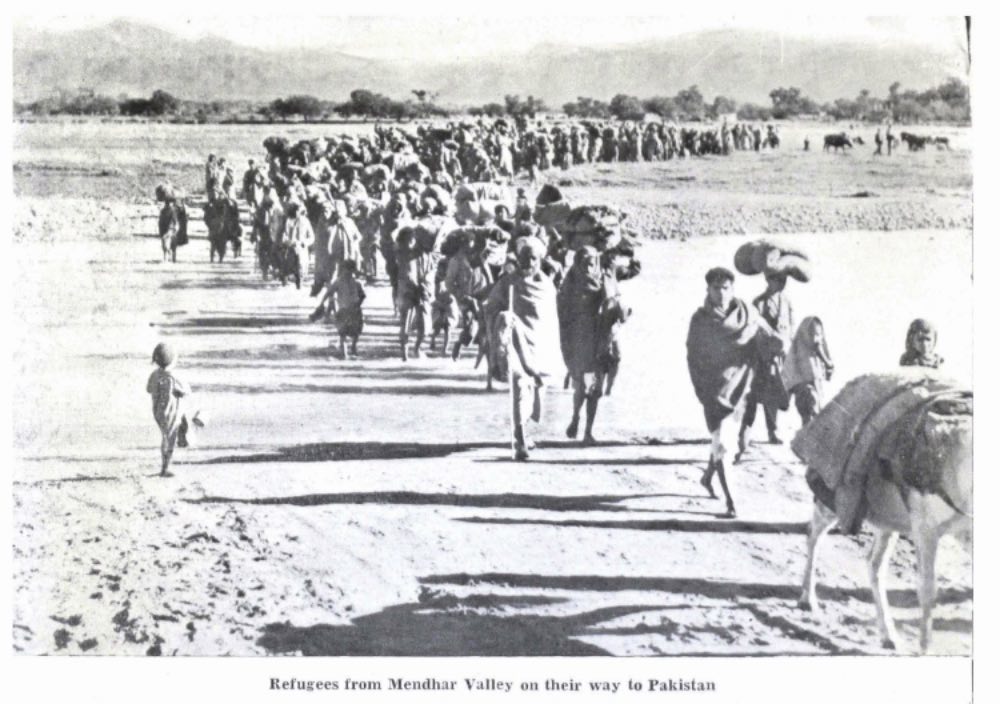 Wearing a sage’s stillness on his smiling face inside his Jammu’s Bathindi house, the snow-white-beared Haji Abdul Majeed Bhat shares his childhood curiosity as a compelling memory that would shape up into a nightmarish narrative down the years.

Some twenty years ago, his curiosity put him on an exploratory trip to unearth one of the most decisive moments of the Jammu Massacre.

Today, much of that has shaped into an exclusive research done on the individual who wielded such an influence atop Jammu hills that rioters had to retreat for a head-banging session—more than once—before coming back to bleed his borough.

Even though a hushed chapter of history, the way the saint was consumed in an organised violence, Bhat says, merits a mention—along with all the individualistic, yet eventful lives of 2.3 lakh massacred lives across Jammu in the fall of 1947.

It was Bhat’s Sialkot familiarity with the saint, which motivated him to look for details about his fate.

Bhat’s grandfather was a Kashmiri, who had migrated from Shopian to Sialkot—much before the great partition would bleed millions and create competitive territorial adventures in the post-colonial world. Sialkot was yet to become a part of Pakistan when Bhat’s father decided to move to Reasi. Behind that move, he later learned, was their Sialkot neighbour, who had become a revered figure in Reasi. That person was Peer Syed Fateh Hussain Shah.

Before rising to prominence by dint of his spiritual powers, Shah had dramatically followed a caravan of roaming godmen in his native Sialkot village called Seewa Karoota as a kid. He had sought spiritual guidance for seven consecutive years in the wilderness, before reaching Reasi where he ran into his spiritual guide, Noor Baba Qalandhar. On his mentor’s instructions, he made Gool-Gulabgarh as his spiritual seat.

“Throughout my childhood, I would wonder about my Sialkot neighbour who had left home to seek spiritual guidance and had become the centre of spirituality in Gool-Gulabgarh, before being consumed by the violence he tried to contain,” Bhat says, turning sullen over the very reminiscence he mulled over most of his life.

The communal violence sparked by Sangh rioters in connivance with the fallen and vengeful Dogra State soon spread across Jammu province. Soon Reasi—the abode of saints—became a hotbed of this violence.

Amid slaughter, Bhat’s family fled Reasi and took shelter in Manzgam village of Kulgam. “I was the first grader then,” Bhat recalls. “We stayed for some three years there, before returning to Reasi.”

The moment they returned, they were greeted by the carnage-ravaged hometown. Muslim villages had turned into ghost towns. Their properties had new nameplates, with new occupants.

What was once a Muslim majority district hardly housed any Muslims now.

Infact, what happened in Reasi in 1947 fall came be known as one of the largest massacres enacted in Jammu Province.

Along with nameless and faceless commoners, the violence had also consumed the spiritual guides of Muslims—along with Bhat’s Sialkot neighbour, Peer Fateh Shah.

“I wanted to understand what exactly happened to the saint whose followers and devotees were both Hindus and Muslims,” Bhat continues narrating the events which eventually forced him to unearth the unreported aspects of the butchery. “And most importantly, what happened to his seat of spirituality and how he became a shrine in Gool-Gulabgarh’s Budhan village!”

All this and more was shaping up into a narrative which would help many to understand what exactly happened in Reasi when fringe Hindu rioters from outside had a field day there.

It almost took Bhat twenty years to collect the details of one of the least reported genocides of modern history. He visited the survivors of that violence and recorded their testimonies.

“Most of the survivors painted a heart-wrenching picture about the massacre,” Bhat says, brooding. “All these years, they could never forget that violence, which consumed their happy lives along with their beloveds.”

And much of that violence had to do with the emboldened Sangh goons patronised by the state. Armed with swords and tridents, they went on to kill Muslim men, abduct and rape Muslim women. As Jammu was fast becoming a killing field, many Muslims fled towards the hilly areas—then, a Muslim-majority zone.

Reasi’s handful of Muslims spared by the violence had also moved to the mountains. “But the communal Hindus were now baying for their blood too,” Bhat says. “So they again ganged up to soak the mountains red with Muslim blood.”

“Gula forcibly hit Captain Kuli Ram’s head with his stick, resulting in his instant death,” Bhat says. “Gula was shot by a Dogra trooper whom he also killed in a counter attack before succumbing to his bullet wound.”

While Dogra forces retreated after Captain Ram’s death, the fatal faceoff forced the villagers to migrate from the area. As the saint also left with his family and cattle in a caravan, his followers advised him to stay in Kachanadhi Budhan — where he eventually constructed a cottage and a mosque.

But when the situation further turned tense, he shifted to one Qadir Baksh’s home along with his family.

During the same time, Captain Thakur Kalyan Singh of Jammu along with Captain Pandit Leekh Ram of Katra and Subidar Baldev Singh of Mirpur arrived in Budhan to kill Peer Fateh Shah in an entourage of two Dogra army companies.

Soon after laying a cordon around the house where Peer Fateh was busy praying, Dogra forces asked the saint’s visitor Chaudhary Ghulam Ali Namardar: “Tell him to come out!”

The scared visitor went inside, but couldn’t muster the courage to break Fateh Shah’s meditative stance. He came out helpless and was sent back. But again, he couldn’t utter a word before the saint.

Sensing his restlessness, Peer Fateh Shah asked Ali to explain the situation. He went on to inform the saint about Dogra forces’ cordon and command.

“Go and tell them that I’m in my Lord’s service at the moment. Let them come in,” the saint told the visitor, who briskly delivered his mentor’s word outside.

Soon as the three Dogra officers entered and stood face to face with the meditative peer, he thundered at them without lifting his head: “You people had to face a lot of hardship coming here. Your names are Kalyan Singh, Leekh Ram and Baldev Singh. You’ve these certain persons ailing in your home. I know, you’ve come here to make a martyr of me. I also want to become Shaheed like my pious forefathers, but know something — my time hasn’t come yet!”

All this might sound thespian—but Bhat says, this is how the survivors, some of whom were even present in the house with the saint, had recalled it: “bit by bit”.

Meanwhile, the three Dogra military officers had fallen at the saint’s feet and tried offering him whatever they had after he revealed intimate details about them.

“But once Peer Sahab rejected their gifts, they pleaded him for some holy remedy for their ailing family members,” Bhat says. “After giving it to them, the indebted officers soon left the village along with their troopers.”

Even before this encounter would become a legend of sorts and further popularise the peer, word had spread down into the plains that as long as Fateh Shah is alive, the mountain massacre is not possible. It was then, another plot was hatched…