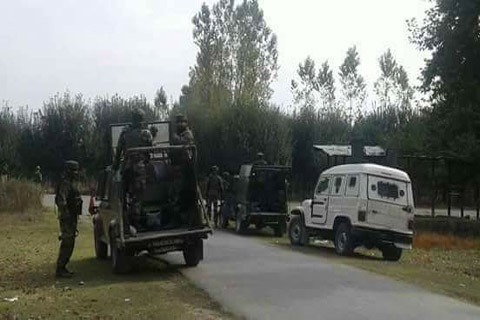 Srinagar: A militant from Pakistan, identified to be part of the Jaish-e-Mohammad outfit, was killed in a brief shootout, police said Sunday.

A police official said that ‘a routine joint naka was laid by the police, army and Central Reserve Police Force in Chottipora area, near the Handwara-Baramulla bypass’, when a car was intercepted “after noticing some suspicious movement.”

“The car was asked to stop. But one of the two militants in it tried to lob a grenade which burst in his hand while another opened indiscriminate firing towards the forces which was retaliated. One militant was killed in the shootout, but his associate managed to escape,” the official said.

In a statement, a police spokesman said: “The killed militant has been identified as Ishtiyaaq from Pakistan on the basis of incriminating materials recovered from him. He was affiliated with Jaish-e-Muhammad.”

“He was involved in a series of militant attacks on security establishments and many other civilian atrocities in the area. Police have registered a case and initiated investigation,” the spokesman said.

High-speed internet was suspended across Kupwara district from early morning. This is the second shootout in last 10 days in police district Handwara, following the killing of a local militant earlier this month.