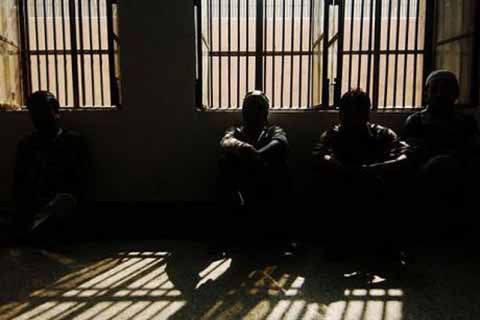 Sopore: Police on Friday claimed to have busted a gang of extortionists by arresting four persons in north Kashmir’s Sopore.

In a statement, police said that a complainant namely Muhammad Ashraf Lone, son of Noor Muhammad Lone, a resident of Highland colony Sopore approached police station Sopore and lodged a written complaint to the effect that a few days back some unidentified persons wearing masks entered his clinic and threatened him that a hit warrant has been issued against him by Laskar/Jaish Muhammad and if he cannot pay Rupees 5 lakh he will be eliminated.

The statement further stated that a letter on the pad of Jaish Muhammad was handed over to the complainant wherein he was directed to assist the militant organizations by providing financial assistance for carrying out their activities in the area.

The spokesperson elaborating said that upon receiving this information FIR No. 93/2021 U/S 392, 506 IPC 13 ULA was registered in police station Sopore.

Accordingly, a team was constituted by seniors to identify and nab the culprits involved in the commission of offences. After tireless and intensive efforts of the team, the perpetrators have been identified as Hilal Ahmed Patoo son of Ab Khaliq Patoo resident of Check Roady Khan Sopore, Tahleel Nisar Ahanger son of Nisar Ahmad Ahanger resident of Lal Bab Sahib Sopore, Imram Aziz Gilkar son of Ab Aziz Gilkar resisndet of Lal Bab Sahib Sopore and Mudasir Hassan Ganie son of Ghulam Hassan Ganie resident of Chinkipora Sopore were arrested and letter pad and Printer were recovered from their possession, he said.

Pertinent to mention that Hilal Ahmed Patoo son of Abdul Khaliq Patoo is surrendered militant and has been arrested in the past while busting this gang the owner/doctor of the clinic and people of the area had a sigh of relief, he said. (GNS)