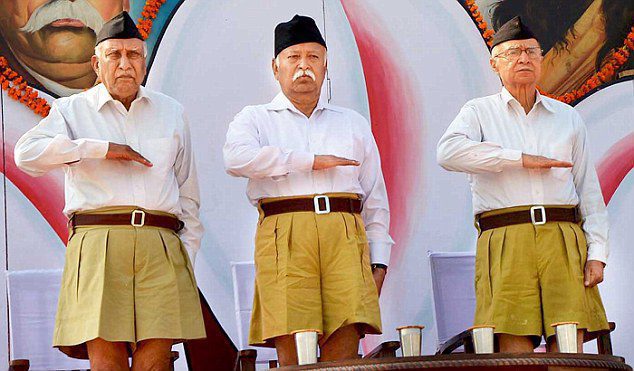 Rashtriya Swayamsevak Sangh chief Mohan Bhagwat has said that in some districts of Assam, West Bengal and Bihar, the population growth rate among Muslims was far greater than the national average.

“This is a clear indication of uncontrolled infiltration from Bangladesh,” claimed the supremo of Hindu paramilitary organisation.

Bhagwat mentioned that religions like Islam and Christianity came to India through invasion. Jews and Parsis came to India seeking refuge, he said

Bhagwat made these comments in the presence of consul general of Israel Kobbi Shoshani at the annual Vijayadashmani event held to mark the foundation day of the Hindutva outfit. Soshani is one of the special guests in the event.

“There is a growing imbalance of population in the entire country, particularly in regions close to the borders…This can pose a grave threat to the country’s unity and cultural identity,” Bhagwat said.

According to Bhagwat, there were major differences in the population growth rates of various communities in India. He also expressed concern about “uncontrolled infiltration of foreigners.”

The Hindutva leader says that the religious imbalance in north-eastern states has also assumed serious proportions.

“The populations of people following indigenous religions have come down to 67% from 81.3% from 2001 to 2011. In just one decade, the Christian population has grown by 13%. In Manipur, the population of religions of Bhartiya origin has come down to 50% from more than 80%. The unnatural growth of Christian population indicates at targeted action by some vested interest groups,” reads the resolution which was released as part of the written text of RSS chief’s speech.

He also advocated the need of implementing the national register of citizenship (NRC).