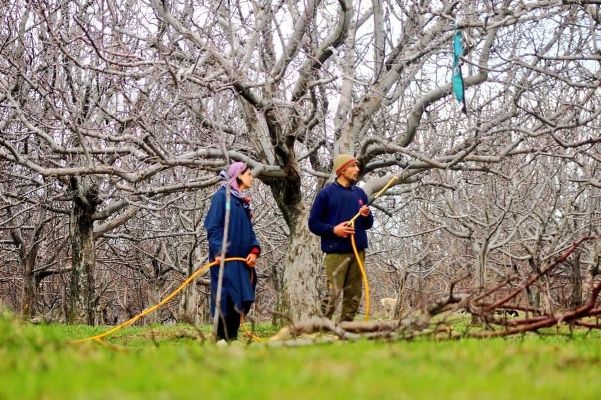 Following recent highway hassles and market mess, Kashmiri orchardists are now getting paranoid about the next season. A textbook repetition of the failed National Saffron Mission is being witnessed with the High Density Apple Orchard schemes, which look great on paper, but fail on implementation.

A Srinagar resident lately procured a patch of land for setting up a high density apple orchard. But his desire to become an orchardist was dispirited by the horticulture department’s inability to set the next season’s target.

And with the valley already bracing for snowfall and long winter, the man is now finding himself at the crossroads.

Before the official hitch, the grower had spent months going through formalities to procure land and prepared it for apple cultivation.

“But for the past few months,” he said, “I’ve been waiting for the green signal from the horticulture department. Nobody is listening to me.”

If the government fails to give the growers targets anytime soon, he said, an entire year of their time and labout will get wasted.

“This is the time when we need to plant new trees,” the grower said. “If it snows next month, then we cannot plant the trees up to a month. It means we will be left with only one month’s time.”

Notably, in year 2021, the Department of Horticulture signed an MoU with National Agricultural Cooperative Marketing Federation of India Ltd. (NAFED), an apex body of marketing cooperatives for agricultural produce in India.

As part of the scheme, NAFED had to invest Rs.1700 Crore for High Density Plantation covering 5,500 hectares in the next 5 years. High density apple plantation was also a part of it.

As part of the scheme, NAFED and horticulture department empanelled Private Enterprises (PEs) whose aim was to implement the scheme to acquire the target of planting 5,500 hectares of land across J&K.

However, the inability of the department to set the target has even pestered PEs.

According to one PE, who spoke to Free Press Kashmir on the condition of anonymity, an action plan was devised in 2021 to set targets for two years. The old PEs with the department were given a target of 100 hectares of high density apple plantation, while the new ones empaneled by NAFED were given a target of 50 hectares. The growers were also part of the action plan.

Pertinently, the task of PEs is to get high quality apple trees from different parts of the world. After the procuring shipment, the trees are to be quarantined for a period of one year. After which, the trees are given to the interested growers.

However, according to another PE, “we don’t know about the targets for this year.”

Ideally, he added, the targets should have come in the month of July, so that the growers could’ve worked in the dry weather.

“But,” he said, “the delay in targets has not only created mistrust between us and the growers, but also wasted our valuable time.”

The scheme also has provisions to provide 50 per cent subsidy to orchardists for the establishment of high-density orchards accompanied by a loan facility for raising 40 per cent of remaining capital.

However, according to orchardists, the growers are facing issues in getting feasibility of their land checked.

“I’ve already invested in procuring land,” he said. “And now, before planting trees I’ve to get my land checked for feasibility. But I’m not getting any kind of help from the department. If they don’t give me feasibility, that means I cannot claim my subsidy. So, how can they imagine that a grower will be interested in establishing a high-density orchard?”

Despite these hiccups, the PEs are terming the scheme “significant and farmer-centric”.

“This is indeed a very good initiative,” one of them said. “high density plantation has a very good potential to change the horticulture scenario of the valley. But to implement the scheme to its core, all the stakeholders need to work hand in hand, particularly the department of horticulture.”

However, according to a top official from the horticulture department, the work orders based on the plant availability has already been given.

“On the basis of information provided by our field staff, we found that the planting material available on ground was only sufficient for 120 hectares,” the official said.

Regarding the delay in setting targets for the next year, he said, the issue is under process. An official notification is coming by next week, he added, which will convey changes in the overall scheme.

“The main bottleneck in setting targets is the unavailability of planting material,” the official reiterated. “By planting material we mean only those saplings which can be planted, excluding those in transit or in quarantine.”

Out of the 11 PEs empanelled by NAFED, he said, only six have given responses to the official communication sent from the department.