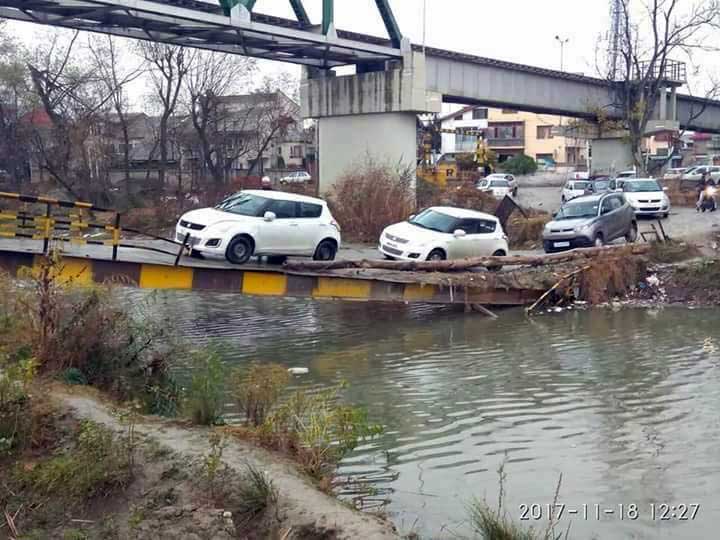 Seven kilometres away from the city Srinagar’s centre Lalchowk, a bridge that would enhance connectivity, save distance, time, fuel and money of the commuters continues to lie in shambles, broken and unsafe for the past 3 years, after the devastating 2014 floods hit Kashmir.

The authorities have missed the deadline for constructing an alternative bridge adjacent to the bridge as they seem to be waiting for the funds that they say, ‘they cannot take out from their pockets’.

However, the unsafe bridge is still being used, with two-wheelers, passenger buses and even school buses plying on it.

Before 2008, when the railways were being constructed, the Railway authorities constructed a bailey-bridge on the Doodh Ganga Nallah at Bagh-e-Mehtab for the convenience of their labourers.

“They would get the mud from mountains of Panthchowk, Pampore etc. The bride made it easier for them to carry resources from one place to another for which they were otherwise supposed to take a longer route,” Ahmad, a resident of Bagh-e-Mehtab said while narrating the story of the bridge.

“The bridge served its purpose well and we began to use it as a link that connects Bagh-e-Mehtab with Rawalpora. It saves about 5-6 kilometres of distance, and time,” he added. However, the devastating September 2014 floods damaged the bridge. The authorities would repair it temporarily but the continuous use of the bridge completely destroyed it. At present, it touches the base of the Nallah, with one side sloppy.

“Although the bridge is the property of Railways they have got nothing to do with it now,” says Ahmad.

“After the floods, Altaf Bukhari who was the Minister of Public Works Department then ordered the repair without proper tendering. In 2015, the new government came and they did not work on it. Today, they just have to lay a slab on it and they have kept it pending for years now. It’s just one span of a two-way bridge. Why is it taking so much of time?” Ahmad, like other residents of the area, questioned.

“Passenger loaded buses, School buses, trucks and all sorts of vehicles pass by the bridge and often get stuck on it. The schools risk lives of children by choosing the bridge. The truck drivers save their fuel! At one time, only one vehicle can pass on it. Now, much of it is under water. Even today, when it rains, it will be under water sometimes,” Ahmad assures.

About 3 years ago, the bridge was declared unsafe. Touching the Srinagar Municipal limits, an alternate bridge is being constructed adjacent to the bridge and is handled by the Roads and Buildings Department, Chadora.

The Executive Engineer admits that the bridge should not have taken more than a year to get constructed. It has been three years and the commuters continue risking their lives because of unavailability of an alternative. “Had the bridge not been there, we would have chosen the longer routes. But the bridge was there, is there. So, it’s obvious what people will use. Everyone thinks this much of risk can be taken but it’s actually a tragedy under waiting,” says Ahmed who also told Free Press Kashmir that the locals allege that the influenced people residing in the area do not want the bridge to be reconstructed and are the ones putting pressures on the officials to not get it done.

Ahmad further said that the locals had tried to shut the ‘death trap’. However, they could not control it.

“You will often find us pushing the buses or cars that get stuck on the bridge. We tried to stop the commuters by installing barricades but the truck drivers uprooted them using bulldozers!” say the locals, in disgust.

The authorities, however, say that the work is pending because the government is not providing funds for its completion. The estimated cost of the project Rs. 74 Lakhs which has been revised to Rs. 178 Lakhs. Out of the Rs. 178 Lakhs, the R&B department is yet to receive Rs. 52 Lakhs.

“The sub-structure is complete and the superstructure is pending. As soon as we get the funds, we will start working. I cannot take out the money from my pocket. The bridge would take not more than one year to get completed but we are short of funds. We are yet to get 52 lakhs,” said Mufti Imran, Ex. En. Chadora.

In April, 2017, Mudasir Yaqoob did a report in Greater Kashmir regarding the bridge, but the authorities seem to be unmoved since then. With the onset of winters, incessant rains and snow on their way, the already unsafe bridge can be deadly.